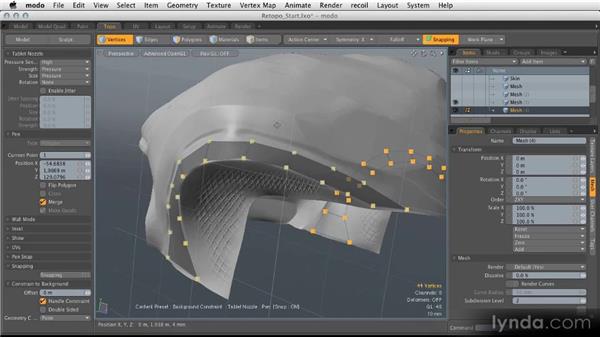 Join Ellery Connell for an in-depth discussion in this video Retopology basics, part of Modeling for Product Visualization in MODO.

In this video, we'll look at some of the basic retopology tools that you can use to turn a rough and very densely subdivided mesh, like this one that's been sculpted, into a clean and smooth and very editable and adaptable subdivision surface mesh. And if you'd like to follow along, you can open up the retopostart.lxo file. And with that, we're going to hop right over into the Topology tab. Now you can see, inside the Topology tab, we get some interesting things happening to the redraw of the geometry.

And the blue colored wire frames that you see are actually what you will be using to make your new topology. So you want those polygons to be visible in your foreground layer, and right now you can see that my foreground layer is actually the sculpted helmet. And my background layer, which is what the typology will constrain to, or what it will stick to, essentially, is right now the character. And so, we don't want to see him at all, so let's go ahead and hide him. And then I'm going to press N to make a new mesh layer. And now you can see that our helmet becomes nice and solid again. And in our empty layer now, we can create some good topology on top of this. Now, as I mentioned previously, this helmet is very rough in a lot of the open, smooth spaces.

You get some lumpiness just because this is intended to be a quick sculpt to get the idea of the form down. Now, with that said, we can take our topology tools, starting with the Topology Pen here. And we can create nice, smooth, even polygons along the top, that will then be turned into a subdivision surface mesh, so that we can get all of the smoothness of the high resolution without any of the lumpiness of the quick and relatively inaccurate sculpt. I've got my symmetry turned on, on the x.

And if you're working on anything symmetrical like this, it's usually a good idea. You can also alternately just model on one side, or create the typology on one side, and then mirror across. But I find that with that symmetry on, you can get a little bit more control over what's happening around the middle of the object. So I'm going to start just by getting my Topology Pen tool, and I'm going to start with some of these kind of smooth even curves. So here we see this one that's going to come up and around behind the ear and behind this kind of vented section. So what I'm going to do is go to my Topology Pen tool here, make sure that Make Quads is turned on.

And then I'm going to click out a couple of points to set the back end of the quad, and then start to move out. You can see here, as I pan around my camera view, that this is indeed sticking to the surface of our model. And now as I click out further here, it will just drop down successive points. And I can start by just relatively roughly placing these. Going back and doing a little bit of cleanup, just as I get going. But for the most part, I'm not going to spend a lot of time on this yet.

I'm just going to go in and add in the pieces here, so that I have just geometry in place, where I need it. Let's go along here, and just as I round this corner, I'm just going to be pulling the outside edge a little further out, just to keep the flow nice and smooth. So let's do that, and I'll come down here, and I'm actually going to taper this out a bit here, as it should with this form. And let's see.

Checking this out, I think I'll just take this polygon here, and pull it right down relatively flush. Notice, I'm not worrying about the open edge. I'm just kind of laying this around, and as I create more geometry, I'm going to create a nice even edge. And the fact that it, this edge got sculpted away a little bit with my lock borders turned off as I got some of the details in, won't really matter, because we're just going to create something clean that goes on top of that. The next thing that I'm going to do is go in and create some secondary pieces that I can then attach and put together.

So, let's look here at this section as a nice place to start. So I'm going to hold Shift and click, to start laying down some topology here. And then I'm going to just click and move along here. And notice, I'm just kind of straddling this little bit of a dashed line that I created, because that might be a part that I want to leave open, and I can always just bridge this together. Now actually, I should back up here for just a second. And note that, as you create you topology here, it's a good idea to keep your number of edges consistent between different sections of the model. So here I've got an edge there and an edge there, an edge here and an edge here, so I'm just going to kind of keep that real similar flow, as I move around here.

To there, to there, to there, and here I have this kind of rounded piece that comes down here, so I'm going to pull this down a little bit. And then I'm going to put this piece right here. Again, leaving a little bit of a gap there, so that I can attach those and stick those together later, or I can leave that open in a nice place to put some other geometry. There's that section there.

Let's look here at something that we can do on the middle of the helmet here. And hold the Shift key and click, to start a new Pen tool. You don't want to go with too many vertices, because we want to keep this relatively clean. And I'm going to leave these not quite touching each other. Because, once I have my initial points laid down, I can then go back with my Topology Pen tool, and start cleaning up the geometry that I have. So with the Topology pen tool, it will let you perform a lot of transformations on your existing vertices and polygons and edges, without messing up any of the constraining issues with these sticking to the background. So for example, if I want to grab these two vertices, the one on each side of the mirror, and stick them together, all I have to do is pull them towards each other and they stick, and they're staying constrained to the background geometry. So this is a very quick way to go in and clean up some of your edges. Moving along in this manner, you can actually plan out the majority of your topology, and this will allow you to create some good polygonal flow where you have details that you want to keep.

So for example, here I've got another kind of flat area here, so I'm going to go through here. And kind of quickly, just pull out a nice flat strip. And we'll just kind of clean this up, through there. And then I'll make one more. And I draw up like this, and then I'll end up actually attaching those two pieces together, once I've got all my topology done.

Now, with the Pen tool active, you can always go back and move around the individual vertices that you've created without hurting that constraining. So these are always going to stick to the background. So here, let's go ahead and drop that tool now, move back over to the model quad view, and for now I'm going to hide my actual background mesh. And then I'm going to press Shift+Tab to subdivide this, and you can see I've got really nice, clean-flowing pieces of geometry, that fill out a lot of the details.

Now, if I continue to do this across the entire surface, we'll end up with large chunks of area that will be good, smooth, clean, and very accurate to my initial sculpt, but will retain a nice, really easy to edit topology, because we're creating these with clean, simple subdivision surface polygons. 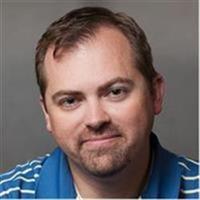