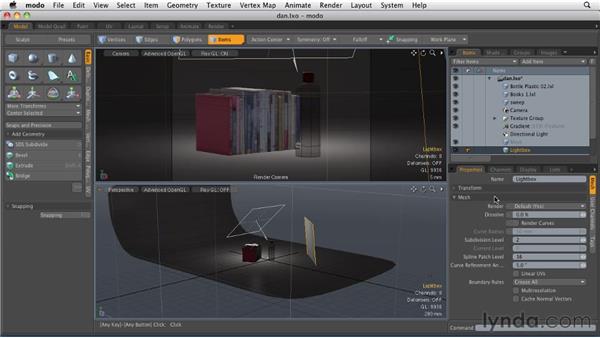 In this previous scene, we set up a three-point lighting set up with a directional light, an area light for a little bit of a backlight, and then another area light for a little bit of fill; but there is something you can do in modo using Global Illumination which I really like, and that's setting up reflective light. So what I'm going to do is delete this Fill light altogether; just right-click on it hit Delete. Let's turn off--this is Directional Light; we won't actually remove it just yet. And that's where we're left with, just that one backlight. Well, what we can do is create a flat plane and reflect that into the object.

I'll hold the Shift key, and I'll click the Plane icon--adds a flat plane to the item list--and we'll click on that and name this Lightbox. And now I'm going to press the Y key for my Transform tool, I'm going to move it up, and I'm going to rotate it down. Remember, polygons are one-sided, so you have only seen the back side. That's why you're scene through it. I am going to put it off to the side here, just out of camera range, and I'll work it around so you can see what this is. It's just a white panel. That's all it is.

So if you've ever worked in a studio, you get a big soft box-- that's what we're creating. Why would we do that instead of an area light? On the books it doesn't necessarily matter, but let's say we have something like a bottle. And I'm just going to click this plastic bottle to add it to the scene, and then we'll go back to Model. And notice that that purple now is actually affecting the scene too from the bottle itself. Turn off the books for a moment, and then let's take this bottle-- I'll press the Y command--and I'm going to move this over. And I'm going to press the R key for scale and make this a little bit bigger, just so we don't have to worry about moving it around too much out of our light source.

Now we can still put our books in and use them if we want. So I'll click the eyeball to turn those back on and with a book selected, I'm going to press Y again, and we're just going to move those back, and let's give them a little bit of an angle. We'll just kind of set up a little scene here, just move these objects. And notice I'm not moving anything on the Y axis because I want these to all sit on the ground. The last thing is I'll take the camera and Shift+A to fit it to view, and with the Y command selected, I'll just click and rotate it up a bit.

What I'm doing now is setting up this lightbox to reflect. So not only will it act as a light source; it will act as a reflection source-- because normally a light doesn't actually show up on the object. You might get a hotspot from the light source, but you cannot reflect the light itself, and that's what this lightbox will allow us to do. So first let's set a material for it by pressing M, making sure that the Lightbox is selected in the Items list, call this Lightbox. And notice as soon as I do that, the scene changes a little bit.

We'll hit the Shader tree, open up the Lightbox Material > Material Reference, and I'm going to make this just a nice bright white, but then I want it to be luminous, meaning it's self-bright. And the way I'm going to do that is with the Transmissive category, so you go to Material Trans--and we'll close up these panels so you can see everything--and down at the bottom is Luminosity. And I'm just going to click this up just a little bit, so we can get a very bright white surface. I don't even need that much. And look what happens. See how white it becomes? But look what happens in your scene.

Not only does it act as a light source; it creates a beautiful reflection in that bottle. Let's bring up the Intensity a little bit more, probably to about 2 or so. And why does it work this way? Well, don't forget, if you go to Render and you go to Global Illumination, that the Indirect Illumination is turned on. If that's not turned on, you will still get your reflection, but that light itself, the Lightbox, is not actually lighting the scene. And because it's self- bright, it's actually casting a light into the scene. So let's press F9, do a Frame Render, and you'll see how this reflective light looks.

I've seen people light entire scenes this way. Typically I don't really like to use Indirect Illumination as an entire light source, because in the real world it doesn't work like that. Generally, you have some sort of light, whether it's a desk lamp, a computer screen, sunlight coming through a window, and then that light bounces around. That bouncing light is your indirect illumination. So just kind of keep that in mind; use it as a fill. Now this render will take a lot longer, as you can see, simply because it's calculating all this new data. At the same time, it just creates such a pretty render you kind of have to go with it.

And if you're not animating the scene and you're doing just a high-res still that you're going to put in an ad, or you're going to put it in Photoshop, or something like that, it's not a big deal to take time and let it render. You can see how just putting this lightbox into the scene not only adds light, but it also creates a beautiful reflection, and it's a really terrific way to work. The indirect illumination is what really creates all of this for us, but we still have our area light mixed in with it, which is creating this nice soft highlight on the top, a little bit of a shadow back here, a little bit of brightness back here to help pull the object off the backdrop.

So consider using lightboxes and indirect illumination, as well as traditional lights, to create any kind of scene you want. 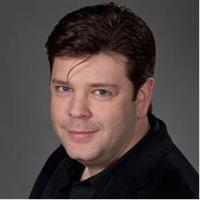 9/16/2011
In this course, author Dan Ablan walks through the process of understanding the MODO workflow while learning to create 3D models and animations. The course teaches fundamental tasks, such as modeling polygons and applying materials with the Shader Tree, while exploring scene building in depth through advanced lighting, camera, and animation techniques. The course also covers MODO's schematic tools and shows how to render animations for various playback media.
Topics include: