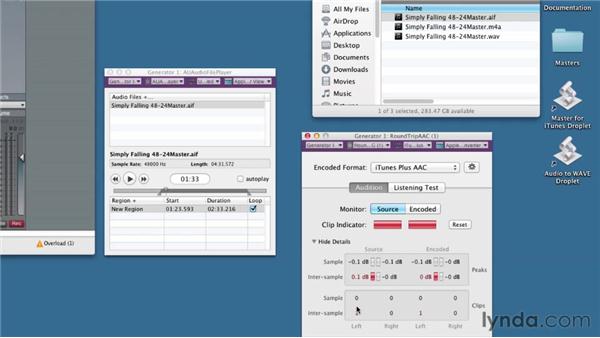 Join Bobby Owsinski for an in-depth discussion in this video Using the Mastered for iTunes AURoundTripAAC Audio Unit tool, part of Mastering for iTunes.

AU RoundTrip AAC is another tool that can be used to compare an AAC file to the original source audio file to check for clipping. It includes clip and peak detection, as well as a simple listening test environment. An audio unit plug-in can be used in any audio unit host application such as Logic or AULab. The AULab is available as a free download at apple.com/itunes/mastered-for-itunes. It's mainly designed as an audio unit host for developers, but it has an application for audio unit auditioning like this one as well.

So after the program is launched, I'm going to go up and I'm going to say give us a new file, and in this case what we're going to see is the routing for input and output, and you can just go and select exactly where you want, and we're just going to keep it where it is in digital input and built-in line output and create a document. Now, this document in fact gives us an input channel, but the input channel that it's giving us is the actual input from the microphone, and this is the input going into this computer.

We don't want this in this case, so what we're going to do is we're going to mute it by clicking on the 1 there. What we do want is another channel, but it's not exactly what you think. I'm going to go up here to the Edit window and hit Add Audio Unit Generator. Now it's going to give us a choice of exactly what we can use as a track here, and we're going to say AUAudioFilePlayer, because really what we want to do is we want to play a file, so there is a Generator window. Now what we're going to do is go to Effects and go down to Apple, and you can see what we're just seeing here is all our various plug-ins that are available in this program, but we really only want the one, and it's down at the bottom, RoundTrip AAC.

Now this gives us a second window. So, now what we want to do is get a file to play back, so we're going to go up here to our original master of Simply Falling and drag it over into the window, and then we play it from here. (music playing) And we can actually take it to wherever we want and set the region, and if we like, we can even loop it as well. But the real trick here is this window here, it's the RoundTrip AAC Generator window, and if we actually go down and look at Show Details, this gives us the interesting part of the whole thing, and this is actually going to show us the distortion that we might see in any peaks or overloads, and even down to the sample and inter-sample level.

Watch when we play... (music playing) ...and take notice what just happened there. We had two different pieces of distortion that happened. We had one on the source file and one on the encode file. And this is the really cool trick about RoundTrip AAC, it allows us to listen to what the source file, the original 48k 24-bit in this case file, and what the encode might be, and this is the AAC encode that might be on the Apple store after they encode it.

What we're seeing here is there are two clips. There is one on the source file and another on the encode, and it comes down and it tells us exactly where those clips were. It says we had a left channel clip, and it was one Inter-sample clip that happened. That's not very much actually, and it's not something that we really hear. Inter-sample clips are interesting because there are really peaks that happen in between each sample. It's not something that we hear as distortion as much as you put enough of them together and suddenly it doesn't sound clean anymore.

So we want to stay away from those if possible, and of course any sample clips we definitely want to stay away from because we can definitely hear those. So let's play a little more. (music playing) I'm going to move up to a place that I know was kind of loud here, and let's play this. (music playing) Now we can see we have some additional clips that happen, and let's go back and listen between the source and the encode again and see if we can hear the difference.

(music playing) What's cool about this is, in fact, it's almost instantaneous that it happens. There is no latency in between the source monitor and the encode monitor, which is pretty neat. The other thing that RoundTrip AAC gives us is a listening test.

If we click on his window here, we can see it sets up a blind A-B test. Now, most of the time you don't need this at all, and I'd say the only time you'd probably use it is if we had a bunch of people around there that were trying to figure out who had the biggest ears or the most golden ears. But nonetheless, this allows you to in a blind test, figure out on an average who could hear the most correct number of cycles. And this gives us two modes here, there is a Test Cycle mode, and there's Training mode, and really, the Training mode is just so we can kind of figure this out. So watch.

If I uncheck Training mode, we'll actually do this 20 times, and at the end of the 20th time it will take an average of all those to see exactly how good our ears are. And once again, this doesn't really prove anything except how well you can hear the AAC encoder or if you can't hear it at all. So as you can see, AU RoundTrip shows you where any overloads are occurring on either the source file or the encode. iTunes won't reject the file with distortion or clipping. If you know where it's at, you can fix it before it is submitted so your listeners get the best sounding songs available.

11/19/2012
In this free bonus course, author and recording engineer Bobby Owsinski explains best practices for mastering music and audio destined for sale on Apple iTunes with their new Mastered for iTunes high-resolution audio program. Bobby demonstrates how to use all of the Mastered for iTunes and iTunes Plus tools used in this process, such as AURoundTripAAC, which allows you to instantly compare the quality of the iTunes Plus AAC file format to your source file. He wraps up with an explanation of the Test Pressing feature, which allows you to preview and approve the encoded file before it's published on the iTunes Store.