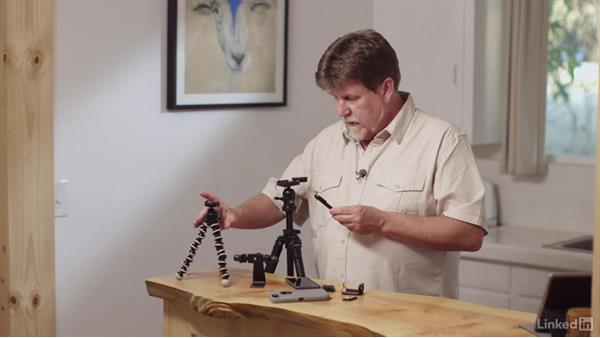 Join Seán Duggan for an in-depth discussion in this video Tripod mounts for mobile phones, part of Mobile Photography Weekly.

- Before long in your photographic explorations you're gonna come to a point where you realize that it's very handy to be able to stabilize the camera. This is particularly useful for longer exposures in low light. Sometimes you might wanna work with an app that allows you to shoot with a slow shutter speed, and, you know, blur moving subjects like water or moving cars, something like that. And for those types of shots, sometimes it is essential to have the camera immobilized. You can try to hand hold it and steady the camera but having it immobilized on a tripod is really the way to go.

So you know the issue of tripods isn't really such a big deal to consider 'cause those have been pretty consistent for many years throughout the history of camera development and camera gear development. But the one thing that is different with camera phones is the mounting hardware, the tripod mount that you affix to the phone so you can attach it to a tripod because of course camera phones do not have a conventional tripod mount like you would find on a regular camera. So what I wanted to share with you is some pieces of gear that I have collected over the past several years.

And to share with you some of my experiences with them and some of the deficiencies that I've run into on some of these tripod mounts, as well as some of the things I thought were really cool and really useful because as is often the case with camera gear or you know really any kind of technical gear you know you see something and you think oh that looks really cool, I'll get that, that's just what I need and then after you use it for awhile you realize well it's okay but it's not perfect I really wish it had this feature or that feature. And you know those are the things that you can only discover through using a piece of gear or talking to somebody else who's used a piece of gear.

So let's start kind of at the low end and this little job here. It's got a little spring-loaded clip. And this is called the iStabilizer and the cool thing about this is you just plop that in there like that, it's a technical term, plop. And then you mount that on a tripod. Okay so that seems great. Of course you know one drawback of this is you can only really mount the phone horizontally. Can't really mount it vertically unless you put it on top of a tripod and flop the head over like that. However, one deficiency that I noticed about this is that it works fine on some tripod quick mounting plates but not on all.

So the quick mounting plate here for my Induro tripod this one doesn't work on. It screws in but it never tightens down. But it works fine on other ones. I have no idea why that's the case but you know again, that's something I only discovered through using it. The other issue with this is that it fits in this kind of low profile case, but it would not fit in this larger OtterBox case, which is a lot thicker 'cause it protects the camera more. So if you want to be able to use the tripod mount and you really want to have a heavy duty case on that, again it's something to research.

So moving upwards is this one here. This is by JOBY which is the same company that makes the GorillaPod, which is a very useful compact tripod. And the cool thing about this is it's got a little hole here you can mount it on a key ring. And you can carry it with you all the time and this just flips open and again similar to this first one here, the iStabilizer this is just a spring-loaded clip here and this is kind of the larger size one. So this one actually would work if I wanted to fit it on my phone in the larger case. So this is pretty cool, I like this a lot.

However, since it is plastic there is some fragileness to it. I was taking a time lapse in Iceland under windy conditions once, on a really heavy, big, sturdy tripod and the wind was so fierce it actually blew the tripod and the camera over, the phone over. Tripod survived, iPhone survived in this case but my first version of this did break so I think for everyday use this is okay but it's not totally stable and sturdy.

Taking it up a notch in terms of the stability is this unit here, this is by MeFOTO and this I really like a lot because it also functions as a camera stand just on its own so I could put this phone in here, let's move it up there. And I could take a picture like that. Of course I would probably turn it around so no, there we go, that's right. So I could take a picture like that and I could rotate it so I could take this, it's got a little ball head here and I could rotate that and shoot with the phone that way.

I could even take this and kind of shoot upwards if I wanted to. So this is made out of metal mostly. There is some plastic on there, but it's pretty sturdy, I really like it. It's got two different holes for mounting it on to different tripods. This will even fit on an Arca-Swiss quick release plate, which is a common quick release tripod head. So I really like this unit a lot. Obviously it's kind of bulky maybe. It's not something you carry in your pocket, but it gives me a lot of flexibility. One thing I like about it is that if I wanted to shoot a panorama on a tripod, I could because in the Apple iPhone when you shoot a panorama you do have to have the phone in a vertical orientation and so you move it from side to side.

So having the ability to mount this phone both vertically and horizontally is pretty significant to me. And then beyond that, as I mentioned earlier this GorillaPod is really useful because you can wrap it around objects like fence posts or tree branches or something like that. And it's just a very useful piece of gear. It's lightweight, would easily fit in a camera bag, or a large jacket pocket. So in terms of tripods, definitely another way to extend the capabilities of your photography and explore new types of photography maybe you haven't done before.

But the big variable with phones is to find a tripod mount for the phone that will address all the needs that you have for the types of images you want to make.