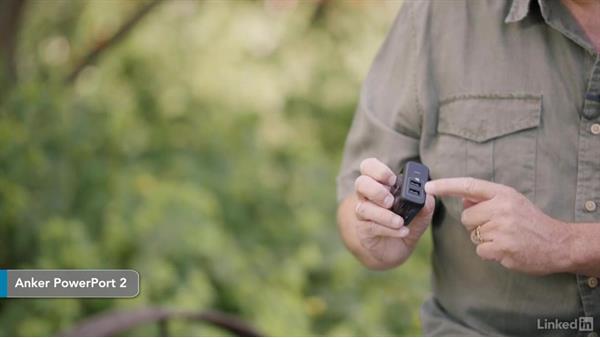 Join Seán Duggan for an in-depth discussion in this video Portable chargers and conserving power, part of Mobile Photography Weekly.

- You know when you're out roaming around looking for cool pictures to take with your camera phone, the last thing you want is to run out of power. But all too frequently, that is what can happen. Hi, I'm Sean, and this week we're gonna take a look at ways that you can manage the power consumption on your mobile device. And we'll also take a look at some interesting gadgets for extending the power when you're on the go. So you know one of the reasons that photography is such a power intensive activity on the camera phone is that just in order to see the scene and compose your frame, the camera's having to provide a live video feed to the screen.

And all that screen activity is definitely gonna sap the battery more so than other activities on the phone. Plus there might be other things going on, you might have a lot of other apps open, you might have WiFi running, you might have one of the maps app running, and all of those are gonna be draining the battery. So let's first take a look at some of the things you can do to better manage the power so you have more battery charge for your photography when that is the important activity you're engaged in. So the first thing to do is close down any non-essential apps that you don't need for doing your photographs.

So to do that on an iPhone you just double tap the home button and then you can drag up on the apps that you don't want to have running. Just drag 'em off the screen and they'll close down. On an Android device, it's similar on the Samsung phone here. There's a button down in the lower left. Just tap on that and I get the same kind of interface there where I see a little tab, kind of like a card deck of all the apps that I have open, and I can just tap on the X to close them down. Some apps are gonna be more power hungry than others.

One of those is the maps or navigation app because that's always hittin' the satellite so it can track your position. So that's definitely one to shut down. Now you might be needing to use that if you're driving to a location, but if you are driving to a location and needing to use the maps app, then plug yourself into, you know, the USB charger in your car so that your phone can be powered while you're in that transit navigation mode. And that way when you actually get to the location where you wanna start taking pictures, you can start with a one hundred percent charge.

Another thing you might consider doing is turning off the WiFi signal in the phone because if the phone is constantly searching for a WiFi signal that could be draining the power. And if you are way out in the hinterlands where there's no cell reception at all or very sketchy cell reception, you might consider putting your phone on airplane mode so it's not even looking for a cell signal. 'Cause that can drain the battery. So all of those things are gonna allow you to put most of the battery power towards your photography and it's not gonna be being drained away by other apps that are in the background.

And you know it's really easy to have tons of apps open and forget about it. You know you can open up the apps and you're just amazed at how many apps are still running, so shut down all the apps that you don't need so you can concentrate just on your photography. Now in terms of the power devices that you can use to charge up your phone and extend your battery power, let's talk about power plugs. Not all power plugs are created equal. So for instance, this little humble plug that comes with the iPhones will only give you an output of one amp of power.

And the iPhone can actually receive up to 2.1 amps of power. So right off the bat you're not getting the fastest charge possible with this. If you have an iPad you can charge up your iPhone using the iPad charger, or you can buy an auxiliary charger. This one here from Anker will take two USB devices here and this has a maximum output of 2.4 amps per plug there. So this is gonna give me a faster charge, even than the one from the iPad which is 2.1 amps.

Now on the charger for my Samsung phone here, this one is already rated at two amps output, so that's good. And then the other thing to keep in mind about power plugs is for a lot of Android phones you can get plugs that are rated to for Qualcomm Quick Charging. And before you invest in one of those, just make sure you do some research and make sure that your particular device can accept that, because not all devices are compatible with the Qualcomm Quick Charging. Now in terms of extra power that you can take with you and power up your phone on the go, there are a number of battery packs that you can get which will actually fit onto the back of the phone, and they're form fitted so there's always on the phone, so it's always giving you extended battery life.

Those are pretty cool, they do of course increase the width of your phone, make it a little bit thicker depending on how much battery charge they carry. I personally don't like those because if I'm upgrading my phone every year or every couple of years, it means I'm also having to upgrade that battery pack. Instead, I prefer to use a charging pack like this that I can just fit in my pocket. So this one here is an Anker Powercore 5000 and this gives me five thousand amps of power, it's got a two amp output so it charges it fairly fast in terms of, you know, what's possible for my phone.

I like it 'cause I can just stick it in my pocket and run the cord and even have it be attached to the device while I'm out photographing. I was doing some street photography on Hollywood Boulevard the other day and I ran low on power, was able to plug into this and extend my shooting day much much more. This will give me two full charges on my iPhone 6, so very very useful. Now one thing to keep in mind when you're looking for these devices is that the packaging, or the disclosure of information about what the device is capable of, is not all created equal.

So on some packages it may be very hard to even see what the output rating is. And I went to the store the other day looking at those and I found a lot of packages where the output was in very very fine print, hard to find, and some packages where it didn't mention it at all. So if you can get one that has two amp output instead of one amp output, your device is gonna charge a lot faster. Now if I'm gonna really be off the grid for several days, I will get this unit here, this is an Anker PowerCore 20100 and it packs 20,100 amps in here.

It's got two USB plugs so I can power both my iPhone and my iPad. And the cool thing about this is that it will give me, on my iPhone 6, anyway, it will give me seven full charges. So depending on how much I'm using my phone each day, the potential is there for me to have an entire week's worth of power just in this, you know, relatively small package. It's not too heavy. So I like to have this with me even when I'm traveling 'cause just sometimes you never know when you need more power and while this is maybe too big to be carrying in my pocket, it's definitely something that I like to have in my pack with me.

So this is really cool and there are other devices that you can get that have a little solar panel on top of them so you can leave 'em out in the sun for eight hours. It'll charge it up, you know, 50 percent power, so if you're really gonna be off the grid for several days, that could be a way to extend the battery life in your phone. The main thing to remember is that, you know, whether you are climbing Mount Kilimanjaro or off on some African safari, or doing street photography in your own town, you don't wanna run out of power because digital photography on the mobile device definitely uses a lot of power.

And with a little bit of planning and managing your battery power on the phone, also some of these other devices you can get, you can extend your time taking pictures.