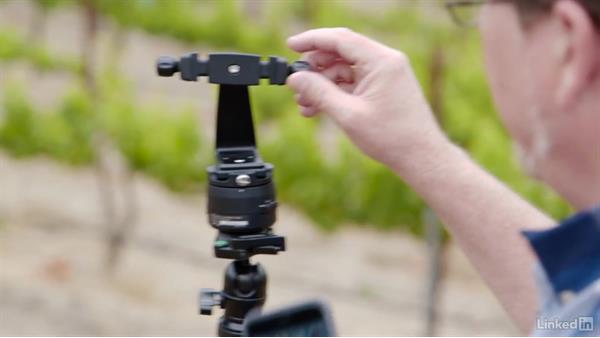 Join Seán Duggan for an in-depth discussion in this video Panoramas, part of Mobile Photography Weekly.

- Hey, there, Sean Duggan here, and this week, we're going to take a look at making panorama images with the iPhone. Now, there are a couple of ways you can go about doing this. There is a built-in panorama feature in the iPhone Camera App. We're going to be doing that handheld, and I'm also going to be shooting separate frames that I can maybe stitch together in software later on, talking about how to overlap those frames, and then finally, I'm going to be using this motorized panning head which will give me a really smooth motion.

It's a real cool gizmo. So I'm going to start off by going into my camera app here, and I can swipe along the choices at the bottom here and we'll choose pano, and the most important thing to understand about this is you have this directional indicator here, so with the arrow pointing to the right here, I'm going to need to pan to the right, so I'd need to start on the far left side of my pano and move to the right. But if you're in a situation where you need to pan the other way, just tap on that arrow and it switches to the other side and you can then back to the left.

Of course, on that shot I'd have to start my shot over on the far right side. This case, I'm going to do, I'm going to pan to the right. I'm going to start on the left side. So what I've got going on here, is I've got the vineyard rows looking right at me, so I'm looking right up these rows out over here, and then we're going to sweep across and get these wonderful trees here. And the light is really soft, it's low contrasting light, so even though we don't have a pretty blue sky, we do have some cool atmospheric effects with the fog in the distance, so I really like how the hillside and the vineyard hills and the rows in the distance are starting to show up as the fog lifts.

So we'll start off here, and you want to do, a fairly smooth motion, you don't want to go too fast. If you go too fast, it will tell you, please slow down. Nothing like being admonished by your camera. Now I can already see that I've got some rough edges on the top, as it's rendering, and we'll come all the way over to the side here to where I get this tree in here, and we'll hit the stop button.

And let's come up here and take a look at that. So it looks pretty good, it looks like it has filled in some of those edges there up on the top, kind of an auto-content aware fill. So that looks pretty good there. The next thing I'm going to do is, I want to do some separate shots, because I want to talk about the overlap feature, if you're stitching these together in another app or maybe bringing it into Photoshop on your desktop. So if you're doing it this way, the main thing you want to do is provide enough overlap between the shots, so that whatever software you're using to merge them together has enough information to figure out how they can be merged together and align them up.

So I usually err on the on side of being more conservative, in terms of how much to give it, I try to overlap them by 50%. And you can look at the roughly center part of the frame there to figure out where you are going to merge them. So I'll take one shot, move over, to where what was in the 50% mark, forward, is now over here. Do another shot, and come over like that, another shot.

And just do it like that. So now I have several shots I can bring together in another app to merge those together. Alright, so next what I want to do is put this on my motorized panning head, and I just want to say one word about this tripod mount here, this is made by MeFOTO, the cool thing about this is it allows me to mount the camera either vertically or I can do it horizontally if I want to like that. Now, obviously, for the built in pano feature in the Apple Camera App, I need to do this vertically, so that's what kind of cool about this is it does have enough clearance there for me to mount the phone vertically here, and have it fit in.

I always love it when I find a photo accessory or a cool photo gizmo that is well designed, and gives me the options that I need. Alright, so in terms of why you might want to use this motorized panning head, the cool thing about this is that it allows me to do an arc, of I think about 120 degrees. It allows me to do a full 180. And I can do it at normal speed, which is what I'm going to be using here, a fast speed or a time lapse speed. So this is multipurpose, I can use it for panos, or I can use it for time lapse, or I suppose I can use it for small video panning.

It is pretty noisy so you wouldn't be able to use the sound, if you were shooting actual video on the phone. And the other to mention about this, this is not designed for big, heavy cameras. It'll work great with your camera phone or a small, compact camera but a heavier camera is not going to work. Alright, so I'm going to set this up for pano here, and I'm going to start kind of in the middle point. And let just me sort of arrange this, and make sure I get a lot of the curvature of the rows, something like that.

And I'm going to start it, and then once it gets to the end of its arc, I'll trigger the pano. So we're not shooting yet, I need to change the direction of the pano, alright, there we go, now we're shooting. And it'll actually stop by itself, the camera will, once it turns direction. I'll just stop it right there. Okay, that looks good, and I'm just going to stop the head here.

And just take this out so we can have a look at it. And there we go, you can see I've got this little bit of a nice curvature here. It went over a little bit too far this way, so I think I need to modify that a little bit, but, other than that, that's pretty good. The cool thing about the panning head is that it will, it has such a slow and smooth even motion that it's going to minimize any sort of alignment area errors that might occur, if you're hand holding it.

Because sometimes when you hand holding it you can get these little places where things don't align perfectly, or it's a little bit distorted, and this makes it so that you don't really have those. So, if you do like to do a lot of panoramas and the landscape and stuff like that, this is a good little tool to have. It was about $39.00. The other thing you can try doing is a vertical panorama. So with a vertical panorama, you would have to hold the phone horizontally. I'm going to switch my direction here, and I'll pan up.

And I'm a little bit far away from this here, but essentially the way that would work is, I would just start it and pan up into the scene. And this is good if you're really close to something, and you want to have a lot of top to bottom view, I could even have my feet in here. So let me come over here and kind of just put my feet in the shot, set it to where I'm panning up, with this sort of a pan you are potentially going to get a lot of distortion in the shot.

But sometimes the distortion is a cool thing, and it can look really interesting. Alright, there we go. So, not just for horizontal, classic panoramas, you also might be able to do some interesting stuff if you choose to use it vertically.