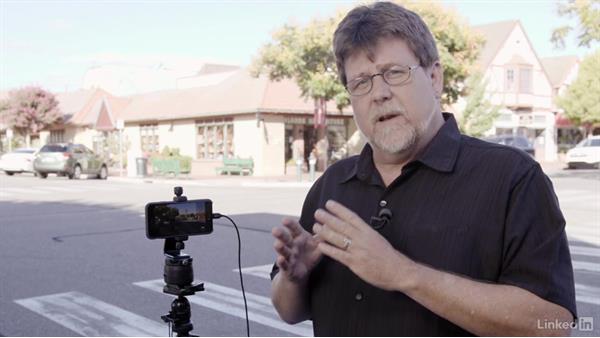 - Hi, I'm Sean, and I'm here in Solvang, California. Setting up to do some time lapse here on the corner. I've got a set up here, a nice view where I'm gonna get a nice sweep of the intersection, and the clock tower in the background. You know, the thing that I really like about time lapse, is that it takes a longer period of time, and compresses it into a much shorter period of time, when you play it back. And so motion in the scene is greatly speeded up, to a rate that we would never be able to see it, with our own eyes. So, situations that work great with time lapse.

I'm sure you've seen the shots of, you know, clouds passing in front of the landscape, or the shadows of trees moving across the ground. And of course you can also do great time lapses with moving cars in the city. It speeds up the action of people moving by, cars driving by, et cetera. So, a really, a fascinating way to explore another aspect of filmmaking in a way. And it's so easy to do on mobile phones. That, you know, why not try it out? So, one aspect of time lapse that you have to be aware of, is it's pretty power-intensive, because the phone is on all the time, the screen is on, and it's always recording.

Now when I set up here my battery was only at 36%. But fortunately, I had this extra battery pack with me. This is a Powercore 5000 from Anker. And this will give me two extra full phone charges to work with. So, I'm just gonna leave it plugged in here. That's gonna allow me to get through my time lapse, even if I have the camera set up for an hour or so, I'm already back up to about 75% here, so that's cool. So, if you are interested in doing time lapse, definitely think about getting one of those auxiliary battery packs you can carry with you.

Another piece of gear that I'm gonna use here, that's a little bit different, is this motorized panning head that you see here, between the top of the tripod and where the phone is. This is gonna allow me to do a very slow panning motion during the course of the time lapse. So, it'll just sort of break it up a little bit, so it's not a static still shot, the camera will slowly be moving. It's not as fancy as one of those slide rails, that's kinda moving through the scene. But, you know for just a portable job you can carry with ya, it works out pretty well.

Now, I'm gonna be using the default Apple time lapse app, that's part of the camera app here for this one. So, let's go in and turn that on. I'll just go into my camera app, and let's swipe up to get into the time lapse mode. And I'll just tap back on the clock tower there, to focus it on there and set the exposure. Now one thing about the default time lapse in the iPhone, is that there are really no controls. The only control is this big red button here. It's basically you press it to start it, and then you press it again to stop the time lapse.

So there's no way to set a frame rate, or anything like that. The app will figure out what the frame rate should be, based on how long your time lapse is. Now, of course it doesn't know how long the time lapse is gonna be when you start. So it applies its calculations after your time lapse is done. So, after you're done with the time lapse on the iPhone, you're gonna see it's gonna say loading, and it takes a little while for it to appear, 'cause it's running all these calculations to figure out what the frame rate's gonna be after the fact. Essentially, all you need to realize about this, is that the phone, the camera in the phone, is going to use fewer frames per second, the longer the duration of the time lapse.

So, the longer the duration of the time lapse movie, the faster the action will seem. So, if I did a five minute movie of the intersection here, it wouldn't be as fast. If I did a 10 minute movie, the action would be double the speed. So that's the only thing you need to be concerned about with that. And I'm gonna actually get this started here, and then I'll show you the equivalent app on a Samsung phone and then we'll talk about another app that gives you even more control. So, the first thing I'm gonna do is step around the front here and turn the panning action on. So that's on here.

And now I'm just going to start that. So now it's running. There's a little bit of a kind of a clock sweep hand there. And we'll just let that run in the background there. One thing about time lapses is that, as the name would suggest, they are somewhat time consuming. And so you have to be in a place where, you know, you realize you have to be there, and babysit your camera, especially if you're out in public. If you can do 'em at home it's great 'cause you can just set 'em up in your house looking out the window, and just forget about 'em for several hours. So, in the Samsung Galaxy S7, if I go into the camera app here, and I go into mode.

I'm gonna choose Hyperlapse down here. Now even though it says Hyperlapse, it's still a time lapse. You might be familiar with the app called Hyperlapse by Instagram. And so there is a way to change the settings here, if I click tap on the clock icon up there, in the top. I can have it set to auto and it's gonna do something similar to what happens on the iPhone, where it's gonna determine what the best frame rate is, based on what's happening in the scene, and the duration of the time lapse, as well as if you're doing a moving time lapse, where you're moving through the scene, it might do some different calculations based on that.

But, there's also ways to choose four times, eight times, 16 times and 32 times speed. So, a little bit more control there, which is kinda nice. I'm just gonna close that and leave that set there. Now, another thing yo can do is you can choose an app that gives you a little bit more control. And this app here is called Lapse It Pro. So Lapse It Pro, if we go into that, gives you a lot more settings that you can configure. So, I'm gonna come in here and tap settings.

And you can see here I can choose a frame interval here, so a custom frame interval based on how long I know I want the time lapse to be, and how fast I want the action to seem there. I've got time scales I can use. I can do a lot of other different settings. I can choose a different resolution, right now it's set to 720p, but I can go higher, set it to 1080p or whatever. So, a lot of different options that I can set in this one. Plus, I can even modify some of the render settings. I can choose whether to save it as an MOV file, or an MP4 file.

So, if you spend a little bit of extra money, and you know, in the grand scheme of things, it's only a few bucks, it's not a lot of money. You spend a little bit of extra money, you'll get a lot more controls, in terms of how you're doing your time lapses. So, I'm gonna let this go here for now. I'm gonna let it go for, oh I don't know, maybe about a half hour, or 40 minutes, something like that. And then I also have another scene, that I've been keeping my eye on, of a windmill down the street. I think when the light gets a little bit lower, that might be a really good subject to use, for when the sun goes down.