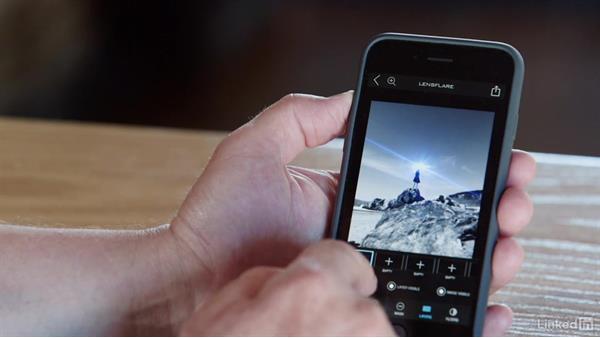 Join Seán Duggan for an in-depth discussion in this video Adding lens flare and other lighting effects, part of Mobile Photography Weekly.

- Hey everybody, Sean here, and this week we're gonna take a look at adding some special effects to your mobile photos in the form of lens flares and lens lighting effects. So there are several apps out on the market that allow you to add lens flare effects to your images, and that's what we're gonna take a look at. So I'm gonna fire up my phone, and I'm gonna come into one of my photography groups and I'm gonna choose the app called Lens Flare.

There's two of these by the same company. There's Lens Flare and Lens Light, and there's some overlap into the features that they offer, but they both essentially do similar things, allowing you to add these lens flare effects. So I'll go into Lens Flare, we'll start out there, and I will tap on New here, and I'm gonna go and find an image to use. Down here at the bottom in the lower left I can get into my albums, so I'm gonna go into my album called In Progress, which are pictures I know I want to work on, and I'm gonna come down here, and I have this picture that I've already done some processing on which is mainly just converting it to black and white of a woman who is holding her arms up above her head, and she was kind of out at the beach up on this rock kind of just doing these poses.

So later as I was going through my images and I saw this picture of her, I thought, well, that would be interesting, but maybe I can put something there in between here hands. So I thought about the lens light here, so what I'm gonna do is I'm gonna go into the Effects menu here and I have all of these different lens flare effects that I can use, I've got anamorphic lens flares of different colors, I've got spherical, I've got different elements here including glints and arc rings, there's edge glare, and there's even light streaks, so if I want to do almost like a light leak effect, I could do that.

I'm gonna go back here to the spherical collection and see if there's one in there that I might use. And this is one of these things where you can just sort of spend lots of time playing around. That one looks kind of interesting. So as I move my finger around on this, you can see how it is dynamically creating this, almost a sub-flare down there, and that looks kinda cool. Plus I can make it larger or smaller, I can angle it, I can do all this interesting stuff.

I can place that sort of right there in between her hands, and that looks kind of interesting, but I think I'm gonna actually go back and maybe choose a different one here 'cause that one's not quite doing it for me. Let's use this one called blue star and see what that looks like. That's looking a little bit better. I'm just gonna angle this a little bit so it's off at a diagonal angle. So the cool thing about this is it immediately puts it in, it immediately blends it out, and there's a couple of ways you can edit this.

You can come into the Edit menu and there's options to change the scale of it, you can change the brightness, the saturation, the aspect, even the color. You can come in here and there are masking tools to allow you to mask it out if it's obscuring part of the image, and you can even come in here to the Layers panel and you can work with layers and modify it that way. One cool thing here is that you can actually turn off the visibility of a layer or turn off the visibility of the image, and I actually use this feature sometimes.

I'll turn off the visibility of the image and I'll save just the image of the flare, and I might bring the flare itself that I kind of created and configured here into another program and blend it in. But for this one here, I'll leave the image visible, and I'll just tap the Save or the Export button and we'll save that out. So let's go and check out the companion app to Lens Flare which is Lens Light, and we'll do a slightly different effect, not quite so science-fiction-y as this one here.

Go back out to my main photography group here, I'll choose Lens Light and I'll tap on New, and I'm gonna go once again into my In Progress album just 'cause it's gonna be much easier to find the image I want to work with. Here we go, and I'll tap Done here, I don't want to crop that. So one thing to keep in mind about when you're using these is whether or not it makes sense for the photograph that you're shooting.

Sometimes if you have really flat light, it's a foggy day and you try to add a lens flare, it just may not look totally accurate. This image here, I think it's gonna work well 'cause I am sort of shooting into the sun in the forest and it is very bright there in the background and obviously a little bit back-lit, so I think it's gonna work out pretty well. So I'm gonna come down into the Effects menu. You can see that the interface is identical to Lens Flare. So I'll go into Effects. Some of the differences, before I choose the one that I want to choose, is it has a collection here called bokeh and glitter, and you can see all these bokeh blurbs that you can put on here, so for instance here's some orbs and you can size those, and that looks kinda cool in a more special effect sort of way.

Let me come out of there, now I'm gonna go into the sun collection, and a lot of different sun things I can use here, I'm gonna choose this one called Helios 'cause it's got some nice flare on it, you can see that there, and if I make it bigger, I can then position this up at the top in the corner and I get this nice flare coming down here from the side. So I'm just gonna put this right there at the corner so I get a little bit of flare coming in.

So something like that, that's all I need to do. It just adds a nice little punch to that. Most of the time when I'm using the Lens Flare and Lens Light effects I'm doing it in an image that already has some hint that it is somewhat of a construction or a fantastical image. I'm not trying to pass these off as straight from the camera nature shots that I took in amazing light. I like to sort of do it in a sense to where the viewer kind of knows that it is more of a considered and constructed image as opposed to a straight shot.

All right, I'll just tap the Save buttom and send that out to my camera roll, there we go. So the cool thing about these sorts of Lens Flare and Lens Light effects is that it allows you to just take your pictures a little bit beyond the normal snapshot and do something a little bit fansastical to them. So if you're looking for something different to do with your mobile photography processing, check it out.