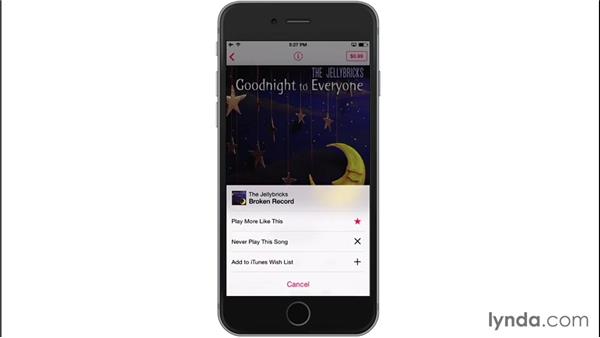 Join Garrick Chow for an in-depth discussion in this video iTunes Radio, part of iOS 8: iPhone and iPad Essential Training.

- Now let's take a look at iTunes Radio, which is a streaming Internet service that's built directly into the Music app. Much like traditional radio, you can't pick specific songs to listen to, but you can choose which stations to listen to and even program your own stations. iTunes Radio is free and you'll hear an ad after every few songs. But if you subscribe to Apple's iTunes' Match service, which we looked at earlier, your iTunes Radio experience will be completely ad-free. Here the main iTunes Radio page is divided into two sections. You have the Featured Stations up top, where you'll find stations that have been programmed around a specific theme, artist, or genre.

And you'll also find some celebrity-created or endorsed stations here as well. Below that is My Stations. And this is where you can create and program your own stations around the types of music you like to listen to. To do this, tap the New button, and you can then pick a specific genre from this list. And from here, you can get more specific within that genre. Tapping one of these headings plays a sample of the type of music you'll hear in that category. ("Same as Me" by Street Joy) If you like what you hear, tap the Plus button.

(indie rock music) And that instantly adds that station to your list of stations and starts playing music. ("Be Slowly" by Jaws) I'll just pause that for now. And we'll go back to the main screen. Another way to add a station is to start by tapping the New button again and then using the Search bar at the top of the screen for specific artists, genres, or even a specific song. For example, I could search for the band The Jellybricks. And under the search results, I could create a station based on the band's body of work as a whole by tapping The Jellybrick's Radio under Artists.

Or if I only like a couple of their specific songs, I can find the song here and create a station that will introduce me to songs by other artists that are in the same vein. I'll choose Jellybricks Radio. ("Goodbye to Everyone" by The Jellybricks) Again that adds the station and immediately starts plays the song. Generally when you add a station around an artist, the first song you'll hear will be by that artist. After that, you'll hear songs by other artists and bands that iTunes Radio deems to be similar. Now when you're listening to your station or in this case I'm paused, but still viewing the Now Playing screen, there are several options available.

First, when the song is played, you can help teach iTunes Radio your tastes in music. Tap the Star button to the left of the Play button, and here if you like the current song, you can tap Play More Like This. The more frequently you do this with songs you like, the better chance you'll hear more songs you like. Conversely, if a song comes up that you're just not into, choose Never Play This Song. The song will immediately stop and the next song will start playing. You also have the optionto add to iTunes' Wish List, which is useful if you think you may want to purchase a song, but not just at the moment.

We'll look at the Wish List in just a bit. Now you don't have to approve or reject every song. If you're indifferent to a song, you can just let it play. Or if you don't like a song, but don't want to ban it from ever being played again, just tap the Forward button. That takes you to the next song. Now be aware that you're limited to six skips every hour. If you find yourself skipping more songs than that, you might want to consider creating another station around a more specific song or artist. You can't fast forward or rewind within a song, so the Playback bar here above the controls is just for seeing how far into the song you are.

And the volume control at the bottom works the way you'd expect. At the top of the screen, there's an Info button. Tapping that gives you several options. First you see the name of the current station, Jellybricks Radio. And under that you see the name of the current artist and song and album name. Next to that you can click this List button to see the entire listing of the album this track is from. And from here you can sample other songs, buy them or buy the entire album. I'll tap Cancel. You can also purchase just this song by tapping its price here.

Below that, if you really like the song and want to hear more like it, you can tap to instantly create a new station around the artist or song. Now below that are some controls to tweak the kind of content that gets played. The Tune This Station slider goes from Hits to Variety to Discovery. And that's fairly self-explanatory. Hits will lean the station heavily on the more popular songs in this genre or theme. Variety changes things up a little bit more and introduces some more obscure tracks into the mix. And Discovery widens the net even more, and you may find it pushes the boundaries of what you assume would fit within this station's playlist.

By default, Allow Explicit Tracks is set to off, but if you don't mind hearing explicit lyrics, you can turn that on. And the last option here is to share the station, which gives you several options to share a link to the station you've created with others. Just cancel that and tap Done. Let's go back to the main radio page. From here, you can manage your history. This is great for those times when you might have heard a song that you really liked, but didn't get a chance to see the name of the artist or the song. Just scroll down and browse through the songs. You can even tap a song to hear a snippet from it. And of course you can tap the price of any songs to purchase it.

Under Wish List, you'll find any songs you've added to your Wish List as we saw earlier. And again from here, you can sample a song or purchase it. So, that's iTunes Radio. If you like discovering new music, definitely check it out and be sure to interact with it as often as possible because the more you let it know your tastes, the smarter it will get with its suggestions.