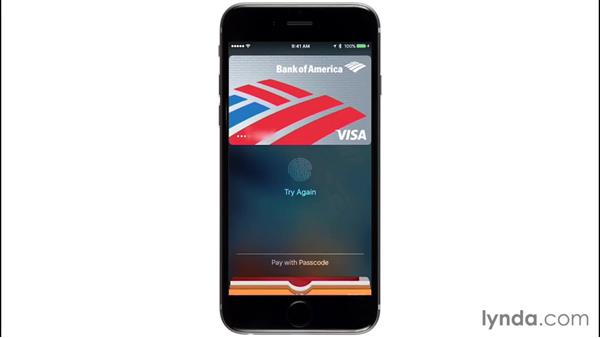 Join Nick Brazzi for an in-depth discussion in this video Working with Wallet, formerly known as Passbook, part of iOS 9 New Features.

- In iOS8, Passbook was the app where you would store…tickets, gift cards, and on certain devices,…you could store your credit card to use for Apple Pay.…In iOS9, the name of Passbook has been changed to Wallet.…But it's still basically the same app.…I'm going to launch Wallet from the Home screen here,…and of course, I see the credit cards that I've set up…to use for Apple Pay, and I see some movie tickets…that I have stored inside of Wallet.…If I want to add a new credit card,…I can just tap on the + button in the top right…and go through that setup process.…

But I'm not going to do that now,…I'm just going to hit Cancel.…So basically, this is the same as it was…when it was called Passbook.…But here's one small, but important new feature.…I'm going to lock the phone…so that the screen is completely off.…When the screen is off, I can quickly access my Wallet…just by double-clicking on the home button.…So I'll do that now.…So it jumps straight into Wallet, and in fact,…it already has my credit card open and it says…