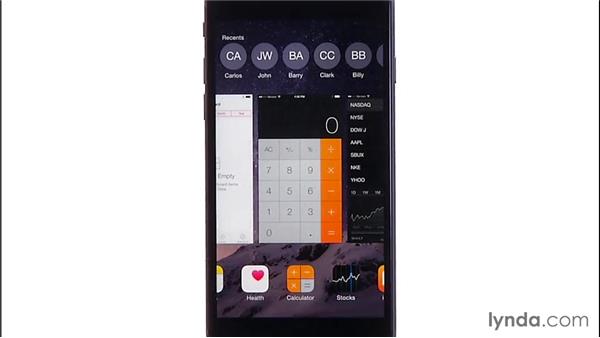 Join Garrick Chow for an in-depth discussion in this video What's new in iOS 8, part of iOS 8: iPhone and iPad Essential Training.

- If you've been using an iPhone, iPad, or iPod Touch since before iOS 8 was released, you're probably interested in finding out exactly what's new in this latest version of the operating system. Here's a quick rundown of some of the best and most useful new features. The camera app has seen the addition of some great new capabilities. It now includes a self-timer, so with the use of a tripod or other type of mount, you could jump into your photos yourself. It also has a new time-lapse shooting mode, which produces great-looking videos comprised of anywhere from dozens to thousands of still photos automatically shot over time.

The slow motion capability has also seen an upgrade on the iPhone 6 and 6 Plus, which can now shoot either 120 or 240 frames per second, for incredibly smooth slow motion. The Messages app now offers a feature to send quick photo and video attachments, which automatically delete themselves unless you or your recipient intentionally save them, the logic being that the photos and videos you send to your friends are often things you don't need to keep indefinitely. In the interest of saving space, contents sent using the Quick Send method is automatically deleted.

Additionally, you can also now send audio attachments to speak your replies. - [From phone] Hey, I can't talk right now. I'll call you later. - And you can also now share your location, so your friends can see exactly where you are for a set amount of time. The way multitasking and app switching is handled has also seen a significant change. You still double-click the Home button to open up the multitasking view. As before, you can swipe the thumbnails horizontally to scroll through recently opened apps, but you can now also swipe the app icons to scroll through them more quickly. At the top of the multitasking area, you now have access to the people you've most recently been in contact with via phone, FaceTime or messages, as well as the people you've stored in Favorites.

You can quickly contact the same people without digging into your phone, messages or FaceTime apps. For the first time ever, third-party keyboards are now supported in iOS. You can download and install any number of keyboards from the app store, which offer some radically different ways to input text any time you need to type on your device. You can now add third-party extension to the sharing panels in apps like the Photos app, Safari, and any other app that has a Share button. This makes it easier to open content in other apps, without having to first press your Home button to open the app you need.

The Photos app has also been enhanced with a much larger and powerful selection of photo editing tools, giving you more control over the appearance of your photos than ever before. You can even extend it with third-party photo editing apps, so you can use the features of other apps without leaving Photos. If you have a device with the Touch ID fingerprint sensor, you'll be happy to know that Apple has opened its use to third-party developers, so in addition to unlocking your device and authorizing purchases from the app store and the iTunes store, you can now unlock content and access to other apps, such as 1Password and DropBox.

That's just a brief rundown of some of the key new features of iOS 8. We'll cover a lot more in the upcoming movies and chapters. And, if you'd like to watch a course dedicated to just the new features found in iOS 8, check out iOS New Features with Nick Brazzi, here at lynda.com