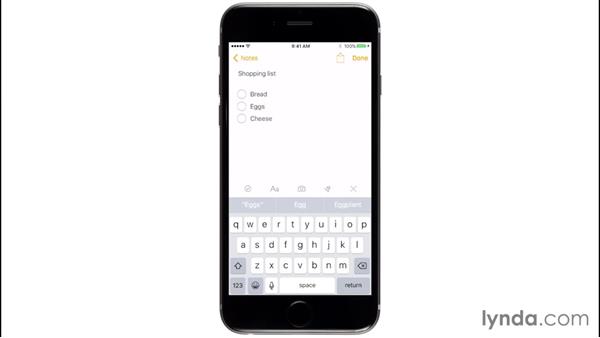 Join Nick Brazzi for an in-depth discussion in this video Using the updated Notes app, part of iOS 9 New Features.

- The Notes app has been a mainstay in iOS for years.…In this version, you're going to see some pretty big…updates in this app, giving you much more versatility…than simple text-based tools.…So I'm going to to launch the Notes app here on my iPhone.…If this is the first time you're launching the Notes app…in iOS 9, you may see this screen telling you…that you need to upgrade your Notes.…The app has the ability to synchronize your notes…across multiple devices,…using iCloud or another online service.…

If you use iCloud, it will need to upgrade your iCloud…notes library before you can use the new features in Notes.…So I'm going to let it upgrade on my device.…I'll just hit this button that says Upgrade Notes,…and that'll take a moment, and now everything is all set.…Now that I'm in the app, I see some categories.…I can store notes in my iCloud account…or in my Gmail account.…If you did not see this screen prompting you to upgrade…when you launch the app, you might see the Upgrade Button…next to one or more of these categories here.…