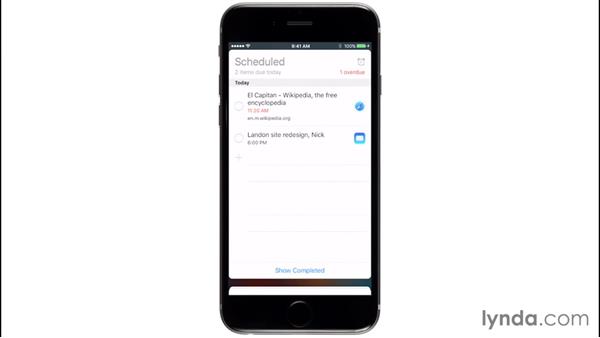 Of course, just by holding down the Home button for a few seconds. Now, if you're using an iPhone, you will not hear a sound effect to tell you that Siri is activated. Instead, you'll see the screen change to the new Siri screen and you'll feel a quick vibration on the phone. You will hear the sound effect if you use Siri on an iPad. Okay, so, I'll activate Siri and say: remind me of this at 6 'o clock tonight. - Okay, I'll remind you.

- So, it sets up that reminder. I'm going to hit the Home button to get out of this and I'll hit the Home button one more time just to go to the Home screen. So, let's look at another example. Maybe I receive a text message. I'll take a look at that and I need to send Steve some information about our upcoming camping trip. So, I could activate Siri and say: remind me of this when I get home. - Okay, I'll remind you when you arrive at home.

- Now that reminder is set. So, again, I'll hit the Home button to get out of that and the Home button again to go back to the Home screen. Now, one more example. I'm going to switch over to a webpage and I'm doing some research here about Yosemite National Park, where we're going to go camping. So, I could ask Siri to remind me of this in four hours or in 30 minutes or something like that, but I want to see what these notifications look like when they pop up on the screen. So, I would never do this normally, but I'm going to do this.

Remind me of this in ten seconds. - Okay, I'll remind you. - So, now that notification is set. I'm going to close this webpage and go to the Home screen. This is what it looks like when you get one of those timed notifications. So, I could mark this reminder as completed, but what's really great here is that it reminds me of the thing that I asked it to remind me of. Whether it's an email message or a webpage, or whatever. It will link me back over to that thing.

So, I have this button here that says Open Safari. When I tap that, it'll open Safari and then it will load the webpage that I asked it to remind me of. So, these reminders are all stored in the Reminders app. So, let's load that and take a look. I'm going to go into the Reminders category here and I can see all three of those reminders that I asked it to remind me of. I'm going to tap on the Reminders tab up here at the top, just to go back to all of these separate tabs. I want to look at the Scheduled category.

You can ask Siri to remind you of something when you get in your car, but be aware that that option only works if you have your phone paired with a CarPlay stereo system in your car. Now, what's really nice here is I can come here to the Reminders app, and I can see all of these reminders, and there's an icon next to each one. If I tap on that icon, it'll take me back to whatever I was doing when I asked Siri to remind me of this thing. So, let me go back to Reminders again.

If I want to go back to that email, I can tap on the email icon next to this reminder, and it'll show me that email message there. Another quick way of going back to Reminders, of course, is to just hit the Back to Reminders button up in the top left corner. Okay, so, I'm done here, so I'll go back to the Home screen. So, here's another new voice command. In previous versions of iOS, I could activate Siri and I could say: show me my photos.

Of course, the Photos app will open and show me my photos. Let me go back to the Home screen. Now with Siri, I can be much more specific. I could say something like: show me photos I took in Switzerland. So, of course, all of the photos that I shoot on my iPhone are tagged with a Geolocation and now Siri is smart enough to go into the Photos app and show me pictures I took in specific locations.

I can be even more specific. If instead of searching for a country, I want to search for photos I took in a specific city, I could say: show me photos I took in London. Or how about this? There have been so many times that I've wanted to show a specific picture to somebody from my photo collection, and I have to spend lots of time scrolling through my pictures to find what I'm looking for. This feature is really going to save me a lot of time.

Now, another interesting thing here is that in iOS 9, the Photos app will automatically sort pictures that you've taken in the panorama mode, or with the front facing camera, and so on. So, I can even do something like this: show me selfies that I took in London. So, it jumps into my photos library and using the word selfies, it sorts down to pictures that I took with the front facing camera. I could've also said: show me panoramas I took in London, or show me screenshots, and that would've worked as well.

So, you should give some of these new voice commands a try. I've already found them to be really helpful for me. Especially when I'm trying to find specific photos.