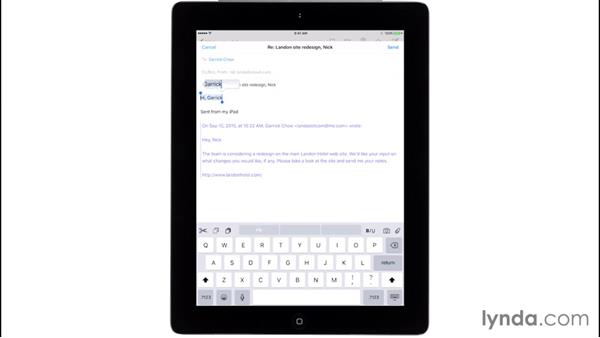 - In this movie, I want to look at two new features…for the onscreen keyboard in iOS 9.…Now, for this I'm going to use an iPad…because one of these two new features…is only available on the iPad, but we'll start…with a feature that will work on all iOS devices,…including the iPhone and iPod Touch.…So I need an app where I might type in some text,…so I'm going to launch the mail app.…I have a message here so I'm just going…to reply to that so we've got somewhere we can type.…My cursor is already in the body of the email message,…so my onscreen keyboard has appeared.…

Now there's one thing I want you to notice,…the buttons on the keyboard are going to change…to show whether I'm typing in a capital letter…or a lower case letter.…So when you look at the keyboard, of course,…all of the keys are labeled but they're…labeled in capital letters.…That's because the first letter of any sentence,…of course, is going to be a capital letter.…As soon as I start typing, you'll see those keys…will change to show me that the next letter I'm going…