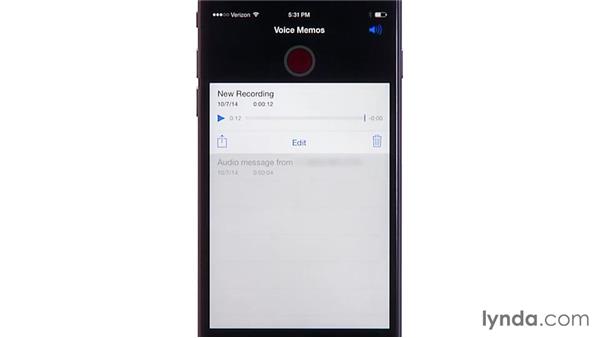 - Although the Notes app is great for jotting down quick notes and lists, some people prefer to speak their thoughts and ideas instead of typing them out. For one thing, speaking is much faster than typing on the iPhone keyboard, and let's you get your thoughts out faster. So for those times when you'd rather speak than type, you can use the Voice Memos app, which is included on the iPhone and iPod Touch, but for some reason not on the iPad. But if you're using an iPhone or iPod Touch, you have the voice memos app. It's default location is in the extras folder. Voice memos are great when you have a sudden idea, or if you need to record an interview or lecture, or even when your kid says his or her first words.

Now as you can see, the app is pretty simple. All we really have here is a big red record button. To record, just tap the button and start speaking, or point the microphone towards whatever it is you're recording. It turns out the boss's wife's name is Stephanie, not Dianne. Let's remember that in the future. You can tap the record button again at any time to pause the recording, whether it's to gather your thoughts or during a break in an interview. When you tap record again, the recording will pick up right where you left off.

When you're done recording, tap done. You'll be prompted to give the recording a name. I'll just leave the default New Recording name. All the recordings you make appear in a list below the record button. Just tap any recording to listen back. On the iPhone, before you play the recording, you'll probably want to make sure the speaker button is selected, which it currently is, that is unless you want to listen through the iPhone's earpiece speaker. The iPod Touch doesn't have the speaker button because it only has a built-in speaker and no earpiece, and all sounds will come out of that speaker unless you have headphones plugged in.

- It turns out the boss's wife's name is Stephanie, not Dianne. Let's remember that in the future. And when you're done recording. - Now I cleared my throat at the beginning of that recording, and I also recorded a little more than I wanted to at the end. Fortunately, you can trim your recordings to edit out things like that, at least if they're at the beginning or end of the memo. To do so, tap edit. Here we see the recording represented as a wave form. Tap the trim button here on the right.

All you do here is drag the beginning or end handles of the recording in to trim off the beginning or end. I can see the wave form of my cough right at the very beginning here, so I'll drag the beginning handle in beyond that point. I'll also drag the end handle to trim off the end. You can use the play button here to preview the edit. - It turns out the boss's wife's name is Stephanie, not Dianne. Let's remember that in the future. - Once it's properly trimmed, tap the trim button. That gives you the choice to trim original, meaning you'll be editing the original recording, and the parts you trimmed out will be deleted.

Or you can choose save as new recording to leave the original untouched and to save an edited version. In this case though, I don't think I need to save the original version with the cough and the extra things at the end, so I'll choose trim original. By the way, if you want to rename a memo, just tap its name and type a new one. Once you've made a voice memo, it's not locked onto your phone. You can move it off your device in a couple of different ways. With your memo selected, tap the share button. Choose message to send the file as a multimedia text message.

The recipient's phone will need to be able to play QuickTime compatible audio files in order to listen to it. If you choose mail, the memos will be attached to a new email message as an m4a audio file, which any recipient will be able to play back with iTunes or QuickTime. Also, when you connect your iPhone or iPod Touch to your computer, you'll see a playlist called Voice Memos. In that playlist you'll find all your memos. When you sync your phone or iPod to iTunes, a playlist called Voice Memos will be created in iTunes. So you'll be able to listen to your voice memos through your computer, even when your device isn't attached.

Now in order to see the voice memos playlist, be sure to go to the music tab and check include voice memos.