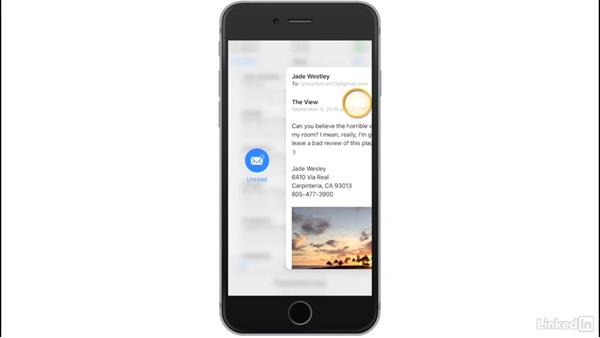 Join Garrick Chow for an in-depth discussion in this video Use 3D Touch, part of iOS 10: iPhone and iPad Essential Training.

- [Instructor] Newer iPhones include a feature called 3D touch, which is a way of interacting with, navigating and controlling your phone by pressing down on the screen. As I record this movie in the fall of 2016, 3D touch is only available on the iPhone 6s and 6 Plus and the iPhone 7 and 7 Plus. So it is a hardware specific feature. 3D touch let's your phone respond not just to where you touch the screen, but also to how much pressure or force you apply to the screen. So in addition to just having an icon or a button, you can also press lightly or firmly to bring up different options, menus or behaviors.

3D touch can be used in many ways within iOS 10 in Apple's apps, but many app developers have also added 3D touch functionality to their apps too. So let's take a look at some ways 3D touch works starting here on the home screen. So for example, I can normally open my Safari web browser by tapping it and that opens up a browser window and I can do things like open new pages, open my bookmarks and so on. I'll press the home button to go back. But with 3D touch, instead of tapping the Safari icon, I'm gonna press down with a little more pressure than I would use for a tap, now I see this menu. At this point I can lift my finger from the screen, you don't have to keep pressing down once a 3D touch menu has appeared.

But as you can see, this gives me quick access to several common activities I might want to perform in Safari. For example, I can show my bookmarks. And that's a quick way to get here without first having to open Safari. Another way to do this is to press down and keep your finger in contact with the screen and then slide to the menu item you want to select, for instance new tab. Let's go back again. You'll find that many of the built-in iOS 10 apps have 3D functionality enabled. For example, there's Mail, and this gives me a quick way to go to my inbox or search my messages or compose a new message.

I'll just cancel that. But Mail is a good place to demonstrate another way to use 3D touch. Normally to read a message you have to tap it. If it's a new message there giving us the blue new message dot next to it. I'm gonna go back to my inbox and swipe the message to the right to mark it as unread again. So sometimes you'll wanna check out a message to see it's contents, but you might not want to reply or deal with it yet. In those cases press lightly on the message and keep your finger in contact with the screen. This is called a peek, it let's you view the entire message, but if I lift my finger the message closes and it's still marked as an unread message.

That way I'll remember to go back to it later. Alternately, if I peek at a message, but I decide I want to read it in it's entirety or respond to it I can press a little harder which opens the message. This is called a pop. And now it's just as if I had tapped on the message to open it. Let me show you one more thing here in Mail because I think Mail is an app where 3D touch really comes in handy. If I peek at a message while keeping my finger in contact with the screen, I can also slide it horizontally or vertically to get different options. If I slide to the left I get the option to delete or archive the email right away.

If I slide to the right I can mark it as unread. And if I slide up I can access all my reply and forwarding options. So those are some examples of in-app 3D touch options. Let me show you a couple more examples. Let's go back to Safari. So sometimes when you're browsing a webpage you might wanna check out a link on the page, but you don't really wanna leave the page you're on. So you can now press down lightly on a link to get a peek at the page it leads to. Just like in Mail, you keep you finger in contact with the screen to peek and then lift to close it. And also just like in Mail, you can peek at the link, and if you decide to jump to that page press harder to pop to that page.

So that's peeking and popping in Safari. And that's just a couple examples of 3D touch in iOS 10. I encourage you to press down on other apps and within other apps to see what options may be available. When it comes to the home screen, when you press on an app you'll feel a short vibration if a 3D touch menu or option is available. So in this case 3D touch works on the Photos app and I can quickly see my most recent photos. Or I can press on the Camera app to quickly choose a camera function. This one in particular can be the difference between getting a shot and missing it.

But if you press on an app and there are no 3D touch options available, for example, for the App Store, you'll feed a different kind of vibration. It's kind of like three quick taps, and the screen blurs for a quick second and then nothing else happens. So it's easy to tell if 3D touch isn't an option. Alright, lastly I wanna show you some text selection options that 3D touch makes possible on the iPhone. I'm gonna go back to Mail for this example. And here's a message that I partially composed. Now on non-3D touch devices, to move your cursor around the screen you either tap on the screen to place it or drag your finger around.

You can also then tap select and then use these handles to make and adjust selections in the test. So that also works the same in iOS 10, but on 3D touch devices I can also press down on the keyboard area, and you can see that allows me to basically use the keyboard area like a track pad. By dragging my finger around the blanked out keyboard I can move my cursor around to place it. Again I wanna stress, you don't have to keep pressure down once you've invoked a 3D touch feature, just press once and then as long as you keep your finger in contact with the screen you can keep dragging the cursor around.

If I wanna make a selection I place my cursor at the beginning of the word and then press down harder. That selects the word and now I can drag to the right to move that selection handle. This is a lot easier and quicker than the old method. Gonna tap outside that to deselect. Another way to select a word is to press down on it directly. And if I get the wrong word accidentally I can just keep pressure on the screen and drag until I get the word I mean to select. And if I press a little harder I can make the multi-word selection again.

So that's the 3D touch feature. Now if you're brand new to iOS and weren't able to follow along with everything I was doing, don't worry. I'll be covering Safari, Mail, and working with text in-depth in their own chapters.