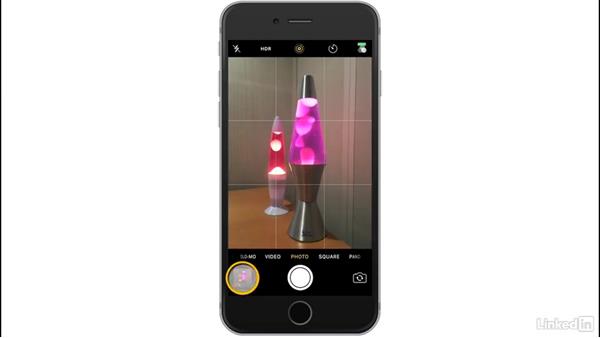 - [Instructor] If you have an iPhone 6S or 6S Plus or later, you have a shooting feature in your camera app, called Live Photos. A Live Photo looks like a regular photo, but when you press down on the screen, the photo comes to life, showing you the moments that came immediately before and after the shot. So it's a combination of a photo and a video. The way this works is when you enable Live Photo shooting, your iPhone starts capturing everything it sees, in approximately three second increments. But unless you press the shutter button, it doesn't save anything. Once you press the shutter button, however, it saves a one and a half second clip of the footage before you pressed the button, and it saves the one and a half seconds that came after you pressed the button.

Let's take a look at how this works. I'm gonna go back to my Camera app. So here in the Camera app, you'll see a circular button at the top of the screen. Tap it to enable Live Photos. Now, at this point, your phone is capturing footage, but, again, nothing will be saved until you tap the shutter button. So, the idea here is to shoot the photo as you normally would, by pressing the shutter button at the point you wanna take the picture. However, since the Live Photo feature also captures one and a half seconds of video after you press the shutter, you should try not to move or lower the camera for about two seconds after you take the shot. So, I'll take my shot, and, really, that's all there is to it.

Let's check out the photo in the camera roll. So, again, this looks just like a regular photo, but if I press and hold on the screen, I can watch the Live Photo content. By the way, this also captures audio, so you'll be able to hear the sounds that were present when the photo was shot too. And that's pretty much it. Now, there are some important things to know about Live Photos. Live Photos can obviously be viewed directly on your iPhone 6S or 6S Plus, or 7 or 7 Plus. They can also be viewed on older iOS devices, as long as they're running at least iOS 9. You can share your Live Photos using the share button, and then sending it by AirDrop, if the other device is nearby, or you can send the photo via Message.

However, if you choose the Mail option, you'll be able to attach the photo to a new email message, as normal, but it won't be the Live Photo version. Your recipient will only receive the static version of the photo via email. You can also view and play Live Photos on Macs, running macOS 10.11 El Capitan or later. But you have to import them into the Photos app, either by connecting your device to your Mac using your Lightning Cable, or by syncing your photos via iCloud Photo Sharing. If you email or transfer the photo in any other way, it will only show up as a static photo. So, it's gonna be up to you to figure out when Live Photos are appropriate, but if you don't intend on using them very much, you can just leave that option off, and shoot regular still photos most of the time.