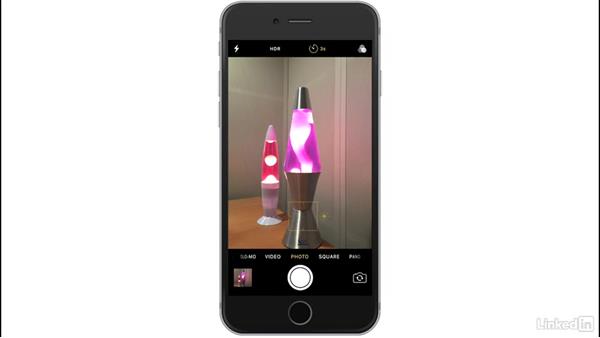 - [Instructor] In this chapter, we're going to be looking at working with the photos and videos you shoot with your iPhone, iPad, or iPod Touch, and we'll start here by taking a look at how to shoot still photos with your device. So start up the Camera app by tapping its icon. The default mode of the camera is to take still photos, but make sure the selector mode here is set to Photo. You can also tell you're shooting still photos when the shutter button is a white circle with a white ring around it. In Video mode it becomes a red circle. Just like with a regular camera, you can shoot in both Portrait or Landscape modes. Currently we're in Portrait mode, and this is Landscape mode.

Notice the various button icons rotate to indicate that the iPhone knows that it's been rotated. You can see here for example that HDR is currently right-side up, the Camera icon in the upper right-hand corner is right-side up, and so on. This ensures that when you copy your photos to your computer you don't end up with sideways pictures that you then have to rotate in your photo management software. So it's a good idea to glance at say, the Camera icon or one of the text buttons before you shoot your photo to make sure your orientation has been registered. I'm just going to switch this back to Portrait mode for now. So to take a basic photo, all I have to do is frame up the subject on the screen and press the shutter button.

(camera shutter clicks) You hear a click and the photo is sent to your photo library, and you're instantly ready to take another photo. Now at this point I want to mention that you want to be sure not to let your finger linger on the shutter button, just tap and release to take your photo. (camera shutter clicks) If you continue to hold your finger down on the shutter button, the camera will go into Burst mode, meaning it will start taking a rapid succession of shots. (camera clicks rapidly) Burst mode is actually great when you're taking photos of subjects that are moving at a high speed, which traditionally would frequently result in blurry shots, but with Burst mode, you can take multiple shots and increase the chances of getting the shot you want.

Now if you have an iPhone 5S or later, it has a unique Burst mode that intelligently tries to select the best photos, so that when you go to review your photos by tapping the icon here in the lower left-hand corner, you'll only see one image, but you can tap Select and pick the ones you want to keep. So I'll choose to keep only the two I selected, and that discards the rest. Let's go back to the camera. Now another way to trigger the shutter in the Camera app is to use either of the volume buttons to snap your photo, making the experience a little bit more like using a traditional point-and-shoot camera.

You can also set a timer to shoot your photo. Tap the Timer button, and then choose either a three or 10 second delay time. This can be useful for times when you need to jump in the picture yourself, or in low-light situations where you want to make sure you're not shaking the camera when you press the shutter button. So for example, I've chosen three seconds, I'll tap the shutter button, and it gives me a countdown. (camera clicks rapidly) And when you shoot with the timer, the iPhone automatically shoots a burst of 10 frames to help make sure you get the shot you want. Now the camera normally tries to figure out the best focus and exposure settings for your photo, but your subject is not always going to be dead center in the fame, and using this default value can make your picture too dark or too bright.

Notice it says AEAF lock at the top now. This is useful if you want to lock in the exposure and focus but then play around with the framing without your phone constantly trying to readjust for the lighting. You can also adjust the exposure independently of the focus. So once you've either tapped the screen to bring up the yellow box, or you've locked the focus, you can then slide your finger vertically along the screen to increase or decrease the exposure. And you can unlock the exposure and focus and set them back to Auto again by tapping anywhere in the viewfinder area.

And there are a couple of other options available for shooting still photos. You can change to shooting your photos in a square ratio by switching over to the Square mode, and by the way, you can switch modes by swiping anywhere on the screen. You're not limited to just using the dial area to do so. I'll switch back to Photo. The Camera app also comes with a selection of built-in live effects. Many camera apps give you the ability to process your photos after you shoot them, but here you can tap the Effects button, and see live previews of each effect. And you can select one and you'll see exactly how your photo will look with that effect applied, and that effect will continue to be applied until you switch back to the None setting.

Now to review your photos, you can tap the tiny thumbnail image of the last picture you took, and that takes you to your camera roll, which we'll look at more closely in an upcoming movie, but here you can swipe side-to-side to review your shots, you can pinch open and close to zoom in and out. When you're done reviewing your photos, you can tap the screen once to reveal the interface buttons, and then tap Camera to return to the camera. And there are a couple of other options here to check out as well. If you have a device with a flash, by default the flash is set to Auto, which allows the phone to determine when the flash is needed.

So just because you have a flash doesn't mean you have to use it. Now the last thing I'd like to show you here is a really useful feature that comes in handy during those times when you need to get to your camera quickly in order to catch a shot. But it can be really time-consuming to unlock your phone and locate and tap the Camera app. By the time you get through that, you might have missed your shot. So instead, when your phone is locked, press the Home or Sleep/Wake button to wake it up, and to quickly access the camera, just swipe right to left anywhere on the screen, and the Camera app opens right away.

Additionally, if you're already using your phone, and you need to grab a quick photo but the Camera app is several screens away, swipe up to open Control Center, and from here you can tap the Camera button to open the camera. So that's shooting still photos with the Camera app.