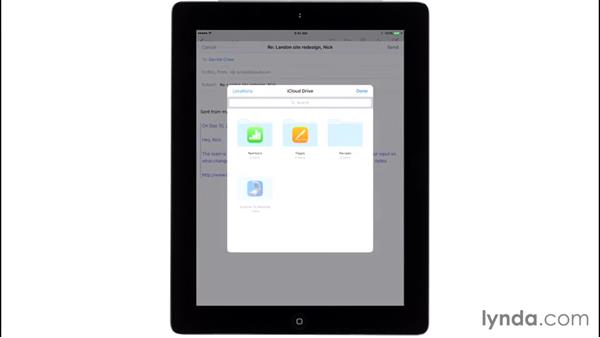 Join Nick Brazzi for an in-depth discussion in this video Sending file attachments in Mail, part of iOS 9 New Features.

- The mail app in IOS 9 now has the ability…to add attachments to messages.…This is an exciting feature, but before you can use it,…you need to give some thought…to where your files are stored.…There is no easily accessible file storage system…built into IOS 9.…You're not able to make folders and store files…directly on an IOS device,…so the workflow that many people have adopted…is to use a cloud storage tool, like Dropbox,…Google Drive, Microsoft OneDrive,…or Apple's own iCloud service.…

You can see, I have all four of those set up here.…What's great about a cloud storage service…is that you can store your files on that service,…then you can access those files easily on many devices:…an iPad, an iPhone, even an Android device or a computer.…In a way, this is better than storing files on your device.…Instead, you're storing your files in a place…that you can access from multiple devices,…so if you don't have a cloud storage service set up,…you might want to think about doing that.…

You can check out the courses that we have…