Multitasking with the Slide Over and Split View functions 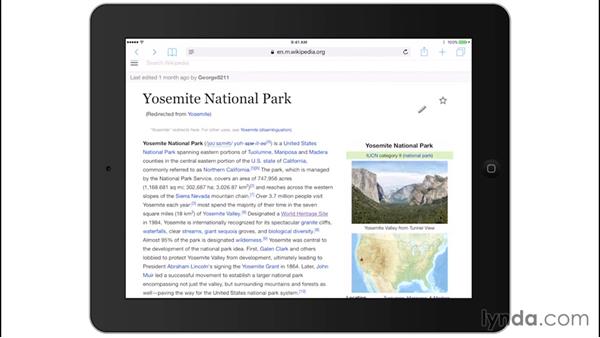 Join Nick Brazzi for an in-depth discussion in this video Multitasking with the Slide Over and Split View functions, part of iOS 9 New Features.

- There are several new options built…into IOS 9 for multitasking.…But I think the important thing to remember is…that not all of these new multitasking features…are available on all IOS devices.…So, in addition to showing you these new features,…I want to make it clear which devices…will support each feature.…So first, there's the standard app switcher.…This is very similar to the app switching option…available in older versions of IOS.…This feature is available on all devices…that can run IOS 9:…IPhones, IPads, and IPod Touches.…

So, I'm going to go into Safari…and let's say I want to…switch over to the mail app,…but I don't want to go to the home screen.…Well, all I need to do is double tap on the home button…and it jumps me to the app switcher.…Which looks different from the way it looked…in older versions of IOS.…But still, I can scroll left and right through…my recently used apps,…I can find the one that I want, tap on it,…and it becomes active.…And of course, I can open up the app switcher again,…by double tapping on the home button,…

Video: Multitasking with the Slide Over and Split View functions