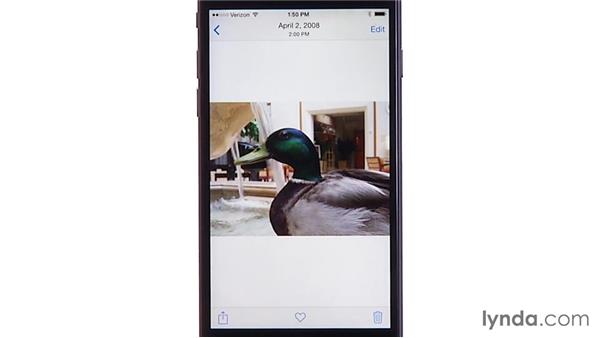 - One of the most important skills you need to really use your iOS device like a pro is to understand finger gestures. As you know, there are no buttons on the front of the phone other than the home button, so the majority of things you'll do are accomplished by tapping, sliding, rotating or pinching your fingers on the screen. In this video, I want to go over the basic moves. There are only a few of them, but they're part of the DNA of using the iOS devices, and it's essential to really learn them well. The most basic gesture is the tap, and it's just what it sounds like. You tap a part of the screen to perform some action.

A complete tap includes both when you touch the screen and when you lift your finger off the screen. Don't hold down too long on certain buttons, or else you may activate a different feature or option. So for example, I can tap any of these applications to run them, like Photos. So here I am looking at my Photo library. I'll cover how to get pictures into your device a little later. Here I can select the collection of photos I want to look at, again, by tapping it. And now I'm looking at the thumbnails of all the photos in this collection. The next gesture is the drag, and again, it's just what it sounds like.

To browse through my photos, I can keep my finger in contact with the screen, and drag the thumbnails up and down. Now closely associated with the drag gesture is the flick. Dragging over and over again like this can really get tedious especially if you have a lot of content to scroll through. In those cases, lift your finger off the screen as you reach the end of the drag. Notice that the content on the screen continues to move. The greatest thing about flicking is that it's speed sensitive, so I can flick slowly to browse at a leisurely pace, or if I know the photo I want to look at is somewhere near the top, I can flick quickly and the thumbnails go speeding by.

Here's a little secret about scrolling in most iOS applications. If you tap the top of the screen, you'll instantly scroll to the very top of the page. This doesn't work in every single app, but many of them do work this way. Now I'll select a photo by tapping it. The next gesture is the pinch. This is when you touch two fingers, usually your thumb and index finger, to the screen and either separate them, which as you can see zooms in on the photo, or bring them back together, which zooms back out. We'll refer to this as pinching in and pinching out.

And it doesn't matter which two fingers you use. You can use your two pinky fingers to zoom in and out if you wanted to. While zoomed in on a photo, notice I can use the drag gesture as well as the flick gesture. If I'm not zoomed in, dragging and flicking takes me from photo to photo. So now we understand the tap, the drag, the flick and pinching in and out, which are really the most basic and commonly used gestures on iOS devices. Now there are additional variations on these moves. For example, a quick double tap on an item often zooms in on it.

Here in photos, it zooms in on the picture. If you're browsing a web site in Safari, double tapping a column of text zooms that column to the width of your screen. There's also multi-finger tapping, which appears in apps like Maps. Here, double tapping zooms in like we'd expect, But to zoom out, you single tap with two fingers. Pinching in and out is available here as well.

Some apps require you not to tap, but to touch and hold an onscreen button to make it work. For example, if I touch and hold on to any of the icons on my home screen, that puts them into organization mode, where I can drag the icons from location to location to rearrange them as I like. For now, I'll press the home button to turn that off. And you might come across some other options that iOS app developers have programmed into their apps, like two-finger dragging, two-finger rotating and so on. On the iPad with its larger screen, you can even use four- and five-finger gestures.

Generally, you'll be taught which gestures to use by the instructions that come with the app. So there you have the basic finger gestures you need to know to really use iOS devices efficiently. We'll touch more on various gestures as we look at specific applications.