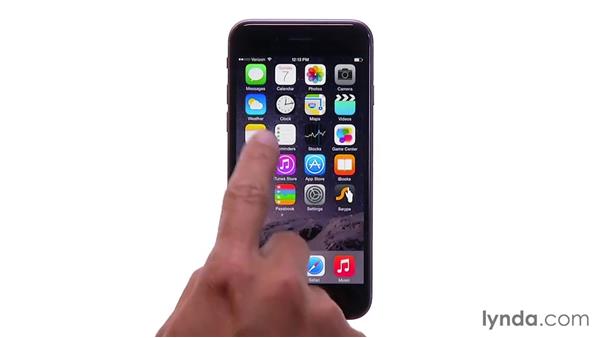 - For many iOS users, one of the most welcomed additions to iOS 8 is its ability to accept third-party keyboards. Meaning, keyboards that are not built into iOS, but have been designed by other app developers. If you're not a fan of the way the built-in keyboard works, or if you just want to try out some other text input methods, you can now do so. The first thing to do is to find and install a third-party keyboard. Now, I'll be talking about how to browse and install apps in the App Store in its own chapter later on, but for now, just know that I've gone into the App Store, and I've purchased and installed a keyboard called Swipe.

Swipe features a completely different text input method, which is very popular on Android devices, and now the third-party keyboards are available on iPhones, iPads, and iPod Touches. It's become one of the most popular alternate keyboards on iOS as well. Alternate keyboards appear as individual apps on your home screen, but in most cases, you don't do anything in the apps themselves except for adjusting settings. To use alternate keyboards, go into 'Settings', 'General', 'Keyboard', and tap 'Keyboards', 'Add New Keyboard'.

When you have any alternate keyboards installed, you'll see this section of third-party keyboards. Tap to select the one you want to use. And just like that, it gets added as an active keyboard. So this process is the same as adding alternate language keyboards, which we looked at previously. I'll go to the notes app, and as before, to switch to other keyboards you've activated, tap the globe button. So now, I'm looking at the Emoji keyboard I installed in the previous movie. I'll tap the globe button once more, and now we're looking at the Swipe keyboard. Now, another way to do this is to simply hold on the globe button and choose a keyboard you want from here.

This will be more efficient if you have many keyboards installed. Now, I'm not going to get into the details of how to use alternate keyboards. There are a lot of them out there to discover, but Swipe was the first one to come out with the swiping method of text entry, which became so popular that this method is found in many alternate keyboards. Basically, the way it works is, instead of tapping letters to type, which you can do here, you use a faster method, which is to touch your finger to the first letter of the word you want to type, and then swipe, or glide your finger to each subsequent letter without lifting your finger until you're done. For some people, this is a much faster and more accurate way to enter text.

As the Swipe keyboard is very good at discerning what word you mean, and it also provides alternates much like the quick type bar of the standard keyboard. You might especially like this method if you have a larger phone like the iPhone 6 Plus. Typing long words can be much quicker with this method. Of course, it takes some practice. I still find that I alternate between the built-in keyboard and the Swipe keyboard myself, but if this interests you, visit the App Store and check out the alternate keyboards that are available. Some cost money and some are free. If you've never purchased an app before, see the upcoming chapter on using the App Store.