Handing off calls to and from your Mac 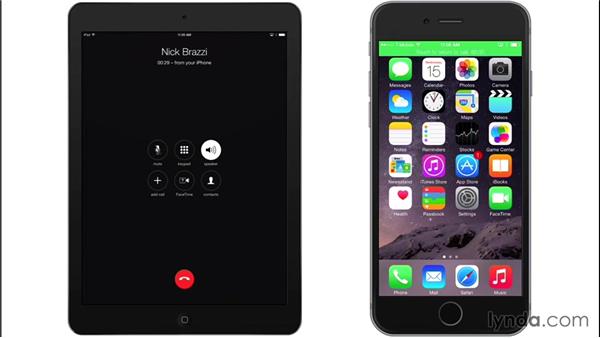 Join Garrick Chow for an in-depth discussion in this video Handing off calls to and from your Mac, part of iOS 8: iPhone and iPad Essential Training.

- New to iOS 8, if you have multiple iOS devices or a Mac running Mac OS X Yosemite, you can now place and receive calls on your iPad, iPod Touch, or Mac as long as your iPhone is on the same Wi-Fi network as your other devices. This can be really convenient if you're iPhone is in another room when a call comes in, but your iPad is nearby. As long as the two devices are on the same network and logged into the same iCloud account, both your iPhone and your iPad will ring. You can answer the call on your iPad using its built-in microphone and speaker. And you can even switch the call back to your iPhone without hanging up or interrupting your call.

So, here's how it works. First, let's look at the settings on both devices. Notice I'm signed into the same iCloud account on both my iPhone and my iPad. Now, let's go to FaceTime settings. This iPhone Cellular Call switch is set to on on both devices by default. And this is what allows calls to be received and placed from iOS devices other than your iPhone. So now a call comes in and notice both devices are ringing. I'll answer on my iPad. (cell phone ringing) So now I'm talking through the iPad.

And you can see at the top there is says "From your iPhone." Notice the green bar on the iPhone, indicating that a call is taking place. So even though I'm having the phone conversation through my iPad, the call is going through my iPhone. Now if I want to switch the call to the iPhone, all I have to do is tap the green bar to switch. And just like that, the call is handed over. You might have seen that the message "Call Handed Off" briefly appeared on the iPad. I'll just hang up from my iPhone now. You can even initiate calls from your iPad. Now since the iPad doesn't have a phone app, you're limited to dialing out from your contacts or other phone numbers you can tap, such as numbers that appear in emails or on web pages.

So for instance, I can go into my Contacts, and I could tap a number here, and as long as the iPhone's nearby, my call will be placed. I won't bother doing that at the moment. So this is pretty cool, and it can be really convenient, especially if you get a call and your phone is in another room or at the bottom of your backpack. But it might also be annoying if all of your devices start ringing every time you get a call, especially if you have several iOS devices in your family on the same account. You probably don't want your kid's iPod ringing when you receive calls. To turn this ability off on specific devices, just return to the FaceTime settings on the devices you don't want to have ring or make calls from.

And here, turn off iPhone Cellular Calls. Only devices with this switch on will make and receive calls through your iPhone. So, that's how to answer and place calls on iOS devices. Again, this also works with Macs running OS X Yosemite. So for info on placing and receiving calls on your Mac, be sure to check out Mac OS X Yosemite Essential Training with Nick Brazzi here at lynda.com.

Video: Handing off calls to and from your Mac