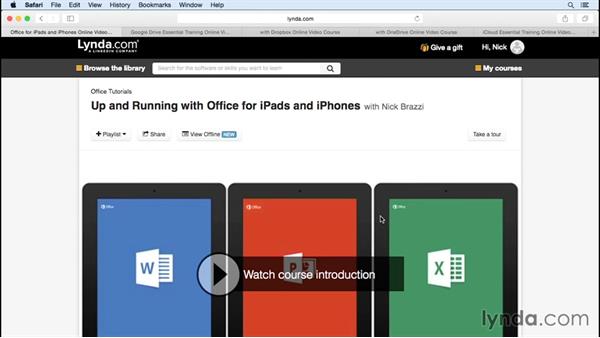 Join Nick Brazzi for an in-depth discussion in this video Goodbye, part of iOS 9 New Features.

- Thanks for joining me for iOS 9 New Features.…For a deeper look at iOS 9, be sure to check out…the iOS 9 essential training course,…which will be rolling out shortly after this one.…There are lots of other courses on lynda.com…that relate to iOS, iPhones, and iPads.…If you want to develop apps for iOS,…there are lots of developer courses.…And for general productivity,…I think it's a good idea to check out…Up and Running with Office Mobile for iPads and iPhones.…This will get you started with the free…Microsoft Office apps for iOS.…

Finally, I think it's really important to develop a strategy…for file storage on your iPad or iPhone using some sort of…cloud storage tool, so you might want to check out…Google Drive Essential Training,…Up and Running with Dropbox,…Up and Running with OneDrive,…or iCloud Essential Training.…Any one of those cloud services will give you…a great option for file storage on your iOS device.…Have a great time with iOS 9.…