Getting transit maps and suggested locations in Maps 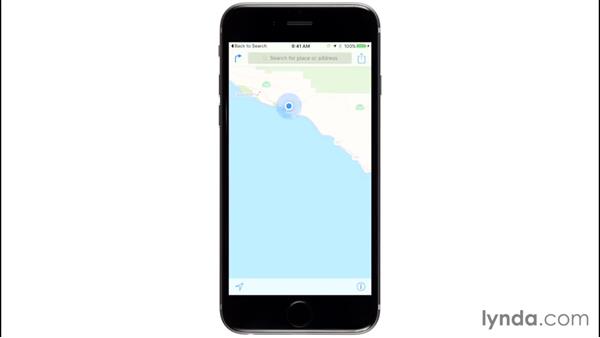 Join Nick Brazzi for an in-depth discussion in this video Getting transit maps and suggested locations in Maps, part of iOS 9 New Features.

- The Maps app has some very useful new features in iOS 9.…The first one that I want to look at is a new way…of displaying search results.…So I'm going to launch the Maps app,…and since this is the first time I've launched it…on this device, it's asking me for permission…to use my location.…I'll hit Allow, and I'll hit Allow here, as well,…and it will locate my current position.…To go to my current position,…I'll just hit the Locate button in the bottom left corner.…So now I want to search for something,…so I'm going to tap on the Search bar…up at the top of the screen.…

But before I even do a search,…there's some options here which you may have seen…on the Spotlight Search screen.…These give me quick, preset searches that…I can perform without typing anything.…So, for example, I'm going to tap on the Transport category,…and then I'll choose Gas Stations,…and then it's going to show me all of the local gas stations…on the map in my location.…So I chose this example because I think I'm going to be…using this feature a lot, so let me clear this search.…

Video: Getting transit maps and suggested locations in Maps