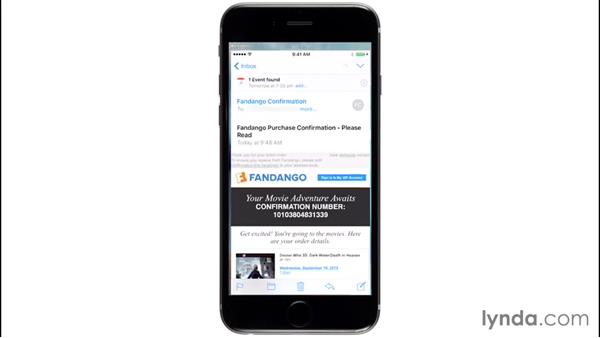 - Each new version of iOS comes with lots of updates…to bundled apps, both big and small.…We've dedicated several movies in this course…to some of the biggest app updates,…but I wanted to take a few minutes to sort of fly through…some of the smaller updates.…Though they may be small,…some of these updates are extremely useful.…Let's start with the Photos app.…Here in the Photos app, I want to make sure I go to…the album section, so I'll tap on Albums…at the bottom of the screen.…You should see some new albums…that are already created for you,…which automatically sort different types of pictures…according to how you shot those pictures.…

So if I go into the Selfies album for example,…I'm going to see pictures that I shot…with the front facing camera.…I'll take a step back to my albums.…If I go into Panoramas, I can see pictures…that I shot in the panorama mode.…So I can zoom in here…and kind of scroll through my panorama.…Let me back up again.…And then there's a Screenshots album,…which shows you screenshots that you've captured…