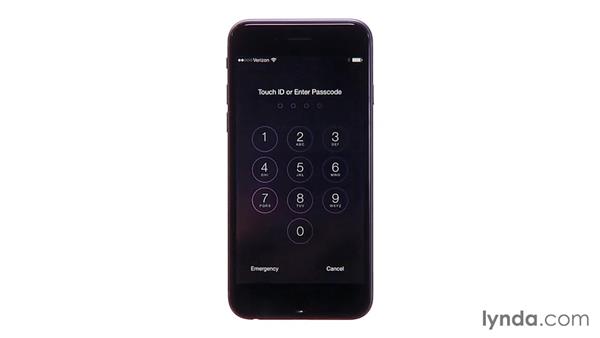 Join Garrick Chow for an in-depth discussion in this video Enabling and using Touch ID, part of iOS 8: iPhone and iPad Essential Training.

- If you have an iPhone 5S or later your phone features a built-in fingerprint sensor. It goes by the name Touch ID and the fingerprint sensor is built into the iPhone's home button. When you first unboxed your iPhone you may already have been walked through the process of setting up Touch ID. But just in case you chose not to set it up or, if you're considering purchasing an iPhone and are wondering how Touch ID works, here's an overview of how to set it up. Start by going to Settings, and then Touch ID & Passcode. Now, in order to use Touch ID you have to enable Passcode which is the security system that requires you to enter a password to unlock your phone, a feature found on all iOS devices.

So tap Turn Passcode On, and enter a four digit passcode of your choice, then enter it again to confirm it. Once you've done that you can tap Add a Fingerprint... here. This is where you teach your iPhone to recognize your fingerprints. You can teach and store up to five fingerprints, so what you might want to do is to teach your phone at least the thumb and index finger on one hand. If you have a significant other or child whom you also want to have access to your phone you can use some of the remaining slots for them. But to get started, you're prompted to place the finger or thumb you usually use on the home button. (phone buzzes) Your phone immediately scanned your finger and gives you instructions to repeatedly place and lift your finger on the home button.

Tap Continue. If you want you can add another fingerprint. We'll just use the one for now, but you may want to take a moment to select the fingerprint you just added and name it so you remember which finger you used. So now we'll lock the phone (phone clicks) To unlock it we can press the sleep wake button or the home button as usual, but instead of sliding to unlock you can just touch your finger to the home button. Let's lock that again. (phone clicks) Now, if you did slide to unlock you're prompted for your passcode which you can type in but even from here you can still just touch your finger to the home button to unlock the phone.

Let's lock it one more time. (phone clicks) I think the easiest way to unlock you phone is by pressing the home button with your finger and just keeping it there for a second. That only requires one action rather than having to press the sleep wake button and then touch the home button. And just like that my phone is unlocked. And it doesn't matter what orientation your finger or the phone is when you touch the home button. Even if the phone is upside down as you're pulling it out of your pocket the Touch ID sensor will still work. Now there are a couple of instances where you have to use your passcode instead of your finger. If you've restarted or updated your iPhone you have to type in your passcode to access the phone the first time afterwards.

You also have to enter your passcode if you haven't used your phone in over 48 hours. And you have to use your passcode to get back into the passcode and fingerprint settings. Here in Touch ID settings you'll find two switches to specify what you want to use Touch ID for. iPhone Unlock is what we've been doing so far, using the sensor to unlock the phone. With iTunes & App Store switched on instead of having to type in your Apple ID and password any time you want to purchase a song, a movie or an app, you can instead just touch your finger to the home button to authorize your purchase. The first time you turn it on you may be prompted to enter your password and from that point on you'll be able to make your purchases with your finger print.

Now, in iOS 8, Apple has opened the Touch ID feature to app developers, meaning you'll be able to unlock apps and data stored in many third party apps using the Touch ID sensor. For example, I have an app here called 1Password, which is a password manager. As the saying implies, you only need to remember one password to access all your other passwords. But instead of entering that master password I can set it up to accept my fingerprint instead. In here I find a Touch ID switch. Now if I leave this app and try to come back into it I can either enter my password or just touch my fingerprint to the Touch ID sensor.

Again, using the Touch ID sensor has to be built into the app by the developer but you'll definitely see more and more apps taking advantage of this capability especially the apps that handle sensitive information. So that's how you use Touch ID to secure and unlock your phone. In the past many people, myself included, didn't use passcodes on their iPhone because it was kind of inconvenient. But now that you can set up Touch ID and access your phone by just touching a button you were going to press anyway, there's really very little reason to not take the step of securing your phone, and to protect your information should your phone ever be lost or stolen.