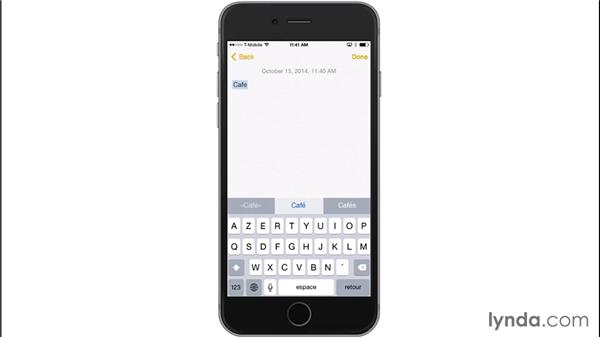 Join Garrick Chow for an in-depth discussion in this video Adding international and emoji keyboards, part of iOS 8: iPhone and iPad Essential Training.

- If you're multilingual or frequently have to type foreign language words, you'll be happy to know that you can activate additional keyboards on your iOS device. Again this is one of the advantages of having no physical keyboard. All you have to do is activate the keyboard in the language you want and you can bring it up at any time to access characters specific to that language. To do this go to Settings, General, and Keyboard. Here tap Keyboards, and here you'll see your primary keyboard language.

Tap Add New Keyboard. Under other iPhone Keyboards, select the language you want to add. Let's select French. Notice there's even keyboards for French(Canada) and French(Switzerland). So now it's added to my list. Now incidentally this is also where you can activate the Emoji keyboard, which isn't actually a language, but a keyboard for typing pictographic characters. They're similar to the emoticons you're probably familiar with like the sideways smiley faces, but with a lot more variety. So I'll tap Add New Keyboard, and here I'll find Emoji, and we'll add that too.

So now I have three keyboards activated. Let's switch to the Notes app. Now once you've activated more than one keyboard you'll see this globe icon appear whenever the onscreen keyboard is brought up. Tapping it cycles through your available keyboards. So with just one tap, I now see the French keyboard. And I see French words suggested in the QuickType area. So I'll type Cafe Olé. Now the QuickType bar is already suggesting the proper spelling with the acute accent on the "e", but if that didn't come up, I could still type the acute accent by tapping it's button here, after the letter I want to accent.

I'm going to continue typing. And I'll just select the final word from the QuickType bar. You might have also noticed that my iPhone isn't trying to fix the spelling of this phrase, since I have the French keyboard activated, therefor it assumes. that I intend to be typing in French. I hit Return to go down a line. Let's switch to the next keyboard we activated, which was the Emoji Keyboard. So here you'll find an incredibly large collection of images and icons you can use to express yourself visually, if that's your sort of thing. There are five separate category taps along the bottom, plus the tab on the very left that collects your most recently used characters.

So for example if I wanted to express my surprise over some news I received, I might come over here to the smiley icons, and tap this surprise face. Notice also that most of these categories have over half a dozen additional screens of images. You can swipe horizontally to browse through them. And again you'll find your most frequently used emoji in this first tab labeled with the clock, which can be useful so you don't have to browse through all these pages to find specific images. But in my case, I'm not really an emoji kind of user, nor do I speak French frequently enough, or even capably enough to warrant having the keyboard activated.

So I'm going to return to my settings, go back to Keyboard and Keyboards. Now if you just wanted to edit the order of your keyboards, you can tap edit, and then drag their handles around to customize the order in which you're cycling through them. But in this case I'm just going to tap the Delete button next to French, and then tap Delete to remove it, and I'll tap done. And as with the case with many lists in iOS8, you can also swipe to the left of your keyboard to reveal the Delete button, and remove it that way. So that's how to add and remove additional keyboards on your iOS device.