Extracting audio from other clips 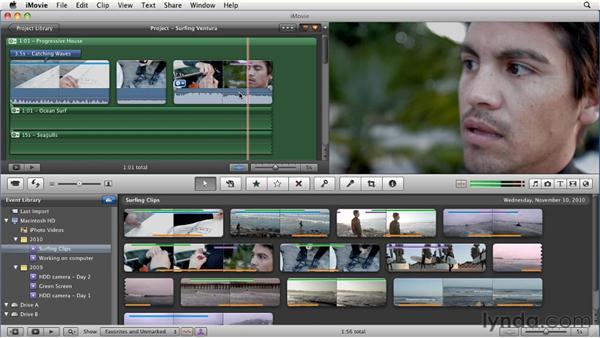 Now, I would like to show you a useful technique for extracting audio from one clip and placing it in another. This could really come in handy when the audio in one of your clips might be bad. Maybe someone said a bad word in the background, or you just want to use some music you recorded in another movie in your current project. Now you have added a lot of audio to our project in this chapter, so I am going to use the waveforms to drag their volumes down to 0, so we can hear the other sounds we'll be working with in this movie. I am going to grab Ocean Surf down to 0, Seagulls down to 0, and same with the Background Music track here. Now if you recall, in the original audio, there is one clip where our surfer is zipping up his wetsuit.

You can hear a truck pretty loudly in the background. I am going to play that for you. (truck engine) (birds chirping) And that was one of the reasons we added the iLife ocean sound effect, but sometimes--probably most times--you are not going to be able to find a conveniently built-in sound effect at your project. In those cases, you might be able to grab sounds from other parts of your shoot to replace the sounds in the clips in which you have undesirable sounds. In fact, you might want to make it a habit to film extra footage for the purpose of just capturing the ambient sounds of your shooting location.

So what I can do is listen to the audio from a couple of my other clips and try to find some ambient noises that would work over this clip. Really, I have plenty of surf sounds in my other footage. I am going to use the sound from the shot of our surfer, Tony, looking out over the waves. Let me turn on the audio on for a moment as I scheme over this. (video playing) So that's pretty good sound right there. Now rolling over this wetsuit clip, I can see this is 7.3 seconds long, so I need that many seconds of audio to place over it. In my Event Browser down here, fortunately I have 10 seconds of sound.

Now I could also grab it from another location in my project itself, but my clipping here of this shot here is only 3.8 seconds long. So in this case, I am going to grab the audio from the Event Browser. So again, this is 7.3 seconds long, so I am going to grab about 7.3 seconds worth of sound. Now to grab just the audio of the selection, I hold down the Shift key and the Command or Apple button on my keyboard. Then I just drag the selection on top of my clip, and I am going to attach to the beginning of the clip. You can look at the status that appears down here at the bottom.

You can see it currently says 0 seconds from clip start or release. If I look at down here, there is the audio that I just attached. That's it. Now, I can drag the original clip volume all the way down, so I don't really need it anymore, and let's give it a listen. (video playing) So now we no longer hear the truck noises, but we still have natural-sounding background noises with the clip, and no one would really know that what they're hearing wasn't originally recorded with this footage.

Maybe as a final touch, I will bring Seagulls sounds back up a little bit. That will help complete the illusion. (seagulls in the background) Now if I could locate the sound of a zipper being zipped up to go along for what we are seeing on screen that would probably be nice, too, but I think you get the idea. So that's how to extract and replace audio between clips.

Video: Extracting audio from other clips