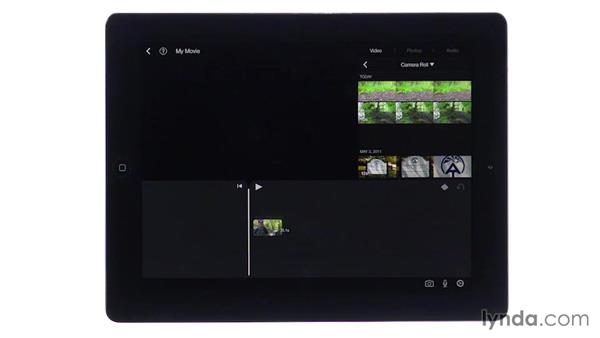 So, let's start up iMovie. When you first open iMovie, you'll see a welcome screen, detailing some of the features of the app. We'll get to all of these later, so I'll tap continue. Next, you see this area labeled Video. If you've ever shot any videos using the camera app, you'll see the videos appear here. But this is just one of the three main categories or views in iMovie. Here at the top of the screen, we have Video, Projects and Theater. Once you've created an iMovie project or two. Projects, will usually open by default when you open iMovie. And thumbnails representing your projects will occupy this space.

You'll be able to tap them to select and continue working on them. But since I haven't created any new projects yet, this area is empty. This third view here, Theater, is for viewing your completed projects. You'll most likely be spending the majority of your time in iMovie working on projects. And you'll open the Theater View when you want to watch your videos or show them to others. We'll talk more about iMovie Theater towards the end of this course. Right now there's not much else we can do here without a project to work with. So I'll tap this plus button to create a new project. Any time you create a new project, you'll have to choose between creating a movie and a trailer. In most cases, you'll select movie, which gives you the freedom to edit together your video, photos, music and sounds together in any way you like.

Trailers are a cool feature that let you create short Hollywood style previews using your footage. But they're used to cut your footage together in a very specific way based on a template. We'll cover those later as well. But for now I'll tap movie. Next you'll need to select a theme for your movie. Each theme has it's own default set of music, transitions and title or text styles. You can sample them by selecting one and tapping the Play button. Now, most of these are pretty stylized and definitely can have an effect on the mood and character of your project. Which can be good or bad depending on what you're trying to achieve.

You can always customize the look, feel and music of any of the themes once you're working on your project. But if you want something basic with no colorful, built-in graphics or transitions, select the Simple theme. So we'll start with that. As you'll see, you can always change your mind later. So with this theme selected, I'll tap Create Movie. And now we're looking at the project interface. This is where you'll create, edit and eventually export your movie. Right now it's completely empty. Here in the upper right-hand corner is the browser area. This is where you'll find any video clips and photos you have stored in your iPad's photo library.

This is also where you access iMovies built-in music and sound effects. As well as any music you have stored in the music app on your device. I'll go back to the video browser. And here I'll make sure I'm doing my camera roll. We'll talk in much more detail about this later. But as an example, to add a video clip to your project, all you have to do is find the one you want to use And then double tap it. So, now I have one clip in my project, which appears down here in the area called the Project Timeline. Or just Timeline for short. This vertical line is the play head. And it indicates which part of your project is currently playing in the viewer.

The viewer is the area here in the upper left. I can drag the clip left and right to skim through the clip to see its contents in the viewer. So the viewer is where you preview and watch your video as you edit it together. Right underneath it is a play button, which when tapped, plays your project from the point where the play head currently is. Okay, this is the Bernheisel road entrance to the Appalachian trail. My destination is Boiling Springs, Pennsylvania. About 10 miles that way. So, I'm going to get going. >> You'll also find a couple of other buttons here. Like the audio button, which let's you save the audio from your clip in the form of WAV form. To the right of that is the undo button. Which lets you take back the last step you performed.

And in this case, that removes the clip from my timeline. You can tap undo multiple times to step back through the changes and edits you've made. If you ever tap the undo button accidentally, or just change your mind. Hold down it, and you'll get this menu where you can choose Redo. There's not much reason to choose undo from that menu, since that's the button's default behavior. Down the lower right hand corner we have three more buttons. The camera button lets you shoot a video directly from within iMovie, using either the iPad's rear or front-facing cameras. We'll look more at these functions a little later in the course. Next to that we have the microphone button.

Which lets you record audio directly into your project. So, for example, if you want to record a voiceover to narrate over your video, you can do so. And the last button here is the project settings button. Where you can adjust things like the theme of your project, control how and if background music plays. As well as how to transition into and out of your project with fades. Now in the upper left hand corner, you have the button that takes you back to the project viewer. The first tab takes you to this overview screen where you can see the current length of your project. When it was last modified. You can also play from here, share it, delete it and so on.

It's also here where you can rename your project to something more interesting than My Movie. Just tap the title. And type in a name of your choice. So now, if I tap my project thumbnail to go back into it, you can see the title now appears in the Title bar. So that's a quick overview of the iMovie interface on the iPad. Now I want to point out that this is what the interface looks like when you're using iMovie in landscape mode. The interface will look slightly different if I flip my iPad to portrait orientation. The most significant change here is that we lose the browser where we select our videos, photos and audio clips. And the viewer takes up the entire width of the screen.

So this can be a nice view to use or switch to, if you want to see your project in a larger size while working on it. You can still get to the media browser by tapping this button in the upper right hand corner. Which drops down this panel. And I can browse between videos, photos and audio. Adding content works just like it did in landscape orientation. Just double tap a clip to add it to your project. You can certainly decide for yourself which orientation you prefer to work in. But for the majority of this course, I'll be working in landscape. And that's a brief, but thorough overview of the key aspects of the iMovie interface. 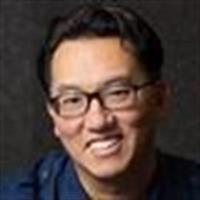 5/23/2014
Learn how to create a polished, professional movie with iMovie for iOS, the easy-to-use video editing software for the iPhone and iPad. Author Garrick Chow covers capturing video, trimming and splitting clips on the timeline, adding transitions and titles, and working with sound. He'll also show you how to share your videos on popular sites like YouTube, Facebook, Vimeo, or even CNN iReport.
Topics include: