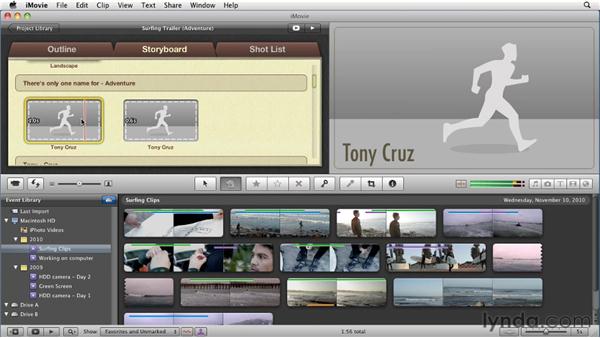 Another new and incredibly fun feature of iMovie 11 is the ability to turn your footage into a professional-looking movie trailer. A movie trailer is the preview for films that play before the movies you see in theaters or at the beginning of your DVD or Blu-ray discs that you watch at home, sort of a teaser to entice you to watch the real movie when it comes out. While you could use the trailers you create in iMovie for the same thing, sort of a teaser, really iMovie trailers are just an easy and fun way to share your footage. They let you quickly assemble your best shots into a slick-looking piece, complete with music and credit sequences.

To start, go to File > New Project, and here under the Movie Trailers heading, you will find 15 different templates to choose from, each created to look like it comes from a specific movie genre. You can just click any one to preview it. Now as I click each one, note that a description will appear under the preview, including the duration of the trailer and how many people are suited to appear in the selected trailer. So if you only have one person in your footage, but the trailer suggests two to six people you might want to consider selecting a different template. So let's look at a couple of these. (video playing) (music playing) Here is another one.

(video playing) (music playing) And let's take a look at one more.

Now once you select the trailer template, you will see that your Project viewer looks a lot different. Now we have the Outline tab, the Storyboard tab, and the Shot List. Under the Outline tab, you can customize the text that will appear in your trailer. Now I am going to continue to use the Surfing Clips footage that we previously imported. So I am going to customize this text to go along with it. You can see this is actually broken down into different sections here. So we'll say this is Tony, name of our surfer. We will keep "and the" and let's call this, Waves of Doom.

Leave the current Release Date. That's fine. I know that our surfer's name is Tony Cruz. He is a male. Now we have got a bunch of other fun things we can fill in. Like our Studio Name, maybe instead of the default HighDef Films, this will be Garricky Productions. And you can see the preview appearing on the right as I type. We have different logo styles we can choose. We've got the Snowy Mountain Peak, got the Sunrays Through the Clouds, Spinning Earth, and you might recognize that these are actually sort take-offs on other famous movie studio logos. I kind of like the Snowy Mountain Peaks, so we'll stick with that.

Then we just have a bunch of credits we can fill in here. I'm kind of egotistical, so I'll leave my name there for all of those. Okay, so now let's assemble our trailer. You can do this either under the Storyboard tab or under the Shot List tab. Now the Shot List tab shows you all the types of shots iMovie would like to use to best create this trailer. We have got Action, Close Up, Landscapes and so on, and each one denotes how long the footage has to be. I can simply select footage and drag it into these boxes. But I like the Storyboard layout better because it let's you see the trailer coming together chronologically if you like.

So we see the same sort of placeholders here. So after the opening studio name here, the first thing it's asking for is a 2.7- second Landscape shot. So I will go down to my Event Browser, and I'll highlight some footage of these waves rolling cross the pier. I have tried to grab about 2.7 seconds, so I'll just click and drag. There is 2.7, and as soon as I release, you can see that it gets added to my project, and it automatically scrolls me down to the next placeholder. Basically, now I just continue my way down the storyboard, adding footage and changing any of the texts that I see.

I can also preview it any time by placing my cursor where I want to start, just like when we are looking at a regular Project viewer, and pressing the Spacebar. (video playing) And when you don't have things in there yet, you can see just the placeholders appear. So the next thing it's calling for here is I need two shots of our subject. Now these placeholders are calling for action shots. So let's grab some shots of our surfer Tony putting on his boots and wetsuit.

So with this particular clip selected, I will find some footage. Now it doesn't matter if I grab one second or a multiple seconds. As much as I grab, only one second is going to go in there, because that's all it's calling for. So, we have got another one asking for the wetsuit, so let's get an action shot here where he zips it up. I will grab about a second there. Again, it scrolls down for me next. Now also worth mentioning here is that if you're looking for footage of people to place in your trailer, this is a good time to take advantage of the new People Finding feature capability of iMovie 11.

If you recall in an earlier chapter, I showed you how you can have iMovie scan your footage to detect the presence of people. So now I can click the People button to show just the footage iMovie has found containing people. Now, if you haven't done this to your footage yet, you can go back and review that movie. But quickly, it's just a matter of selecting your footage in the Event Browser and then choosing File > Analyze Video, and then selecting People. Now there is nothing saying you have to place exactly what the placeholders are calling for, either. So even though this is calling for a medium shot of our subject, I do have a medium shot, so I'll just select some footage and send that up.

This is calling for a Landscape. Let's turn off the People Viewer here. Maybe I'll just select this, send that up. Now this calling for a medium shot of our subject, but maybe in this case I want to show the surfboard being waxed. I can just grab that and just continue through like this. Now let's find some other shots here quickly. I kind of like how the camera is going under water here, so let's grab some of that. Maybe some shots of him coming towards the camera. Now in reality there is not enough footage of this event to make this a really interesting and diverse trailer, but I am just going to grab some shots and complete the rest of the storyboards so you can see in the final product.

Even though I am short of footage, you will find that the editing and the music really help filling for the lack of actual content. So next, we need some more action, grab some action there, another medium shot. Let's go with Tony himself there. And so we've got a bunch of different shots to fill in here, so let's just grab some very quick shots here. Got some surfing, another wide shot. Let's find some distance here.

Other medium shot, locking up there. More action. Now again this is nice because we can actually see, using the orange bars, what footage has been incorporated into our project already. Once I've finished filling them all out, you will see this dialog box telling me it's ready to be watched. I can either click Done, or I can click Watch Trailer. Let's give it a look. (video playing) (music playing) So there it is. Pretty cool stuff I think.

Now just be aware that you can make some changes here. We do have ability to remove the clips or to mute or disable the audio from the clip, which they are by default, since we have that background music playing. There is also the ability here to do slip-edits so you can adjust the portion of the clip that's being used at any point, using the Clip Trimmer like we've have seen before. But other than that, really it's just a matter of opening up the storyboard and just dragging in the appropriate shots. So that's the new Movie Trailer feature of iMovie 11. These are a lot of fun to play around with, so be sure to give them a try with your own footage.