Taking the neighborhood warmup shots by the bay 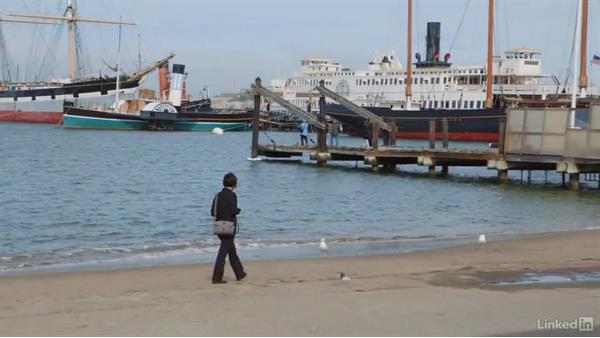 Join Valerie Jardin for an in-depth discussion in this video Taking the neighborhood warmup shots by the bay, part of Street Photography: Two Hours in a Neighborhood.

- So now we are near the water and we are gonna sit out for our first shot of the day. The sun is coming out, which is great because I love working with shadows when I'm photographing people on the street. I'm wearing my dark sunglasses. That's also kind of a good way to be a little bit more inconspicuous because it avoids making eye contact with people. And I wanna see what's happening down there. It's not super busy, which I like, I'm more of a minimalist photographer and I don't like big crowds, so there could be some interesting shadows or people riding bikes maybe a good spot to do some panning shots.

We'll see, we'll see when we get down there. Let's go. So I made it down to the beach and I put my camera on aperture priority usually around a four, five, six, letting it do a lot of the work because on the streets you only have a fraction of a second to capture something so you have to let the camera do a lot of the work itself. So I went down and right away I saw this young couple sitting on a skateboard. They were both sharing a skateboard and they were looking at the ocean so I thought that was a [camera snaps] really cute moment so I went down there and photographed them from the back.

When you photograph people from the back it has to be special because otherwise it's pretty boring. You don't have facial expression. But because they were sharing that skateboard that was worth it [camera snaps] right there. I did talk to them after, just wishing them a good day. I told 'em, I just grabbed a shot of you. I didn't have to, they didn't hear me take the picture, my camera is fully silent. Hi, it's very cute to see you two sitting [couple laughs] on that skateboard. I grabbed a couple of shots. So, I don't usually do that.

People don't notice me. I just move on unless I'm doing a street portrait, then I don't have interaction with people, but then I went down to the beach and photographed a couple of the sea gulls there and then I saw that we had some pretty strong shadows and there were a lot of bicyclists coming through so I walked around the coast to try to get some of the shadows. I'm not too sure that's gonna work I switched the camera to shutter priority to freeze motion and then I tried to find an interesting bicycle rider.

Not everyone makes for an interesting subject. I tried to look for people preferably that are not wearing bicycle helmets, although I know it's not the safest thing but if I can have somebody with the hair blowing in the wind it's just a lot more romantic of a shot than somebody wearing a helmet. So those are the things I look for So got a few shots, not sure if any of them will work out, but it was worth a try. I noticed those stacks so I went out and I saw this tiny little dog on top and I love dogs and I actually am working on an ongoing series of street dogs.

And that little dog was barking at the birds which were bigger than him. Can I photograph the little dog? - [Dog owner] Yeah. - [Valerie] Is he afraid of the birds? They're bigger than him. [Dog owner and Valerie laugh] - [Valerie] So I grabbed a couple of shots of the dog and I noticed a shadow, too, so that's always good when you can get one. When the sun is so harsh you have those strong shadows, it's a good time to make use of those shadows. There's really no bad time to shoot. It's just making the best of what you have.

And I love sunny days on the streets because those shadows make for more interesting shots. Also one thing to keep in mind when you have the sun at this angle is to not capture your own shadow in the shot. So try to position yourself in a way that you're not in the shot yourself because that's really distracting, you know, I'm a street photographer I don't remove things in post-processing. So now the sun is almost getting to an angle where the shadows are not going to be very interesting, so we can go and try to find a different area to shoot. 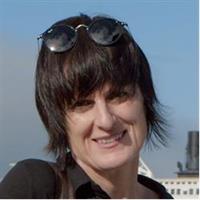 4/22/2016
When shooting travel or street photography in famous places, it's easy to end up with clichéd pictures of tourist attractions. When you focus in a smaller area, just one neighborhood, you can get much better results. Valerie Jardin, photographer and host of the popular Street Focus podcast, takes us to the Fisherman's Wharf neighborhood in San Francisco to get some unexpected photographs of iconic spots. She shoots images of the bay and famous Powell Street cable cars, and takes street portraits of the locals. She also shares her recommendations for gear, and closes with a review of the day's best shots.

Video: Taking the neighborhood warmup shots by the bay