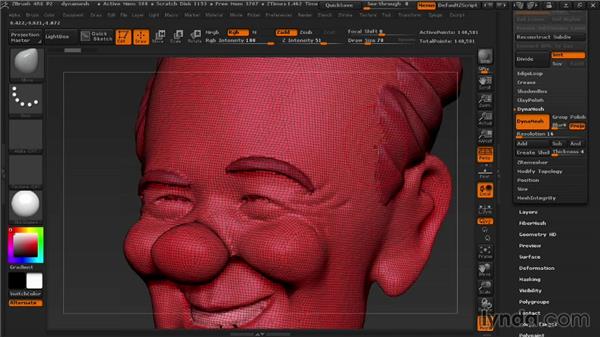 Dynamesh shelling is a totally different approach to creating wall thickness than panel loops. It is better in some ways because it avoids the problems with the inner surface passing though itself and poking through the outer surface. However, it's a little trickier to set up and it's prone to other troubles. I tend to use it only when I'm having trouble getting panel loops to work correctly. However, in those situations, dynamesh shelling can really save the day. Let's see how it works. Before making the shell, we need to dynamesh the whole model together.

So to do this, let's get all of the subtools merged into one. Let's go down to our Subtool palette, Merge, and Merge Visible. So this placed a new tool in our toolbox, Merged Howard, with everything merged into one sub-tool. Okay. Now, let's go into the Dynamesh controls, under Geometry. And let's go find Dynamesh. All right, so one thing we need to concern ourselves with is the resolution. Now depending on the size of your model, the resolution can have greatly different results.

So let's see what happens now when we hit dynamesh. Okay. So let me zoom in, and we can see the change here. So I'm going to hit Shift-F to turn on our wire frame, and I'm going to hit Control-Z to undo. And then Control-Shift-Z to redo, just so you can see what happened here. Okay so dynamesh has fused different parts of the model together. Those parts that were different sub tools are now all fused into one surface. And you can see it kind of has this even grid like pattern all over it. However, some strange things did happen, like the gap between the teeth and the lower lip kind of got filled in, in most places, but is still open a little bit right here.

So, I like to futz with the dynamesh settings a little bit. I'm going to hit ctrl + z to undo that. Let's hit shift + f to turn off wire frame. So I'm going to set this to something more like 40. And I also like to turn off project sometimes. because that can use some processor power that's unnecessary, can make it take longer than it really needs to. Hit dynamesh again. Okay so this is somewhat better result it's not filling in that gap anymore and we keep a lot of nice detail. Now sometimes there's the temptation to really crank the resolution really high to get every last detail.

And that can sometimes work for dynamesh but what happens with the shelling we're going to do later on is that create so many polygons that it crashes later on when you're trying to add the shell. So I like to set this to something that's no more than it just has to be. And a way you can tell whether it's too high or not is if you put the model on screen about the same size that it's going to be printed in real life and you flip back and forth between dynamesh like undo and redo, if you don't see any change, then you might have this set too high.

So actually let me undo the dynamesh and lets try to set this to something even lower than 40 lets try 24. So after the dynamesh you can see there's a slight change. I'm hitting undo, control z, and then control shift to see the re-do. And you can see there is a slight change. So when you can just barely see the change onscreen when the model is the same size that the print is going to be that's a roughly good rule of thumb that the resolution is set alright. Okay, with the dynamesh resolution established, we're ready to move on to the next step.

5/30/2014
Prepare your models for 3D printing with ZBrush, the popular program for 3D modeling and digital sculpting. Learn how to measure your models with real world units, so everything prints at the right size; save on material costs by hollowing out your models; and make sure your colors print true. Author/artist/3D aficionado Ryan Kittleson also shares some advanced tips and tricks for getting the best results from your particular printer.

This course was created by Ryan Kittleson. We're honored to host this training in our library.
Topics include: