Setting up a default project 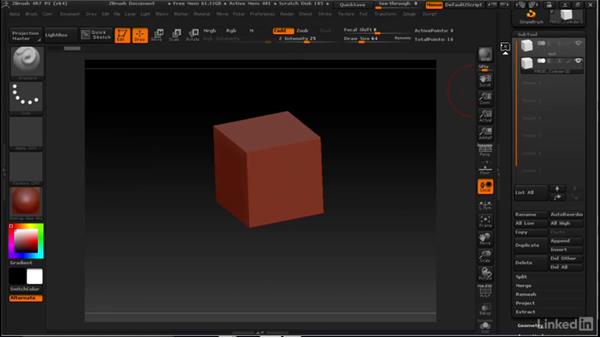 - If you use ZBrush on a regular basis, you're going to find that by customizing a few things, you can get work done faster. Then you can save a project with everything set up the way you like it. When you restart ZBrush, you can just open that default project and you're good to go. In this video, I'm going to show you all the adjustments that I like to make for my default project. However, you can definitely add your own customizations as well. So let's how it works. So I'm starting with a fresh session of ZBrush here, and what I want to do is get rid of the lightbox.

So I'm going to hit the comma key on the keyboard. And let's just go ahead and make a default mesh just by clicking on the cylinder 3D and make polymesh 3D, so what that's going to do is actually make it a 3D object that we can drag into the scene. So go ahead and click and drag here, and then go into edit mode. Now a lot of this is going to seem a little bit tedious or cumbersome but it's what we need to do to get a scene that's set up really good so that it can be the default that we just open in the future without having to do through these steps.

Now the reason I like to start with that cylinder 3D, is because it does something very interesting to the scale of the scene. If I come down to the Export SubPalette, you can see that scale is set to zero. So now I can set this to anything I want, which I want it to be set to one. Now what this does is it tells ZBrush to set the scale of any objects to a one to one ratio. So if I import a model from another scene, it's going to import it and keep the scale at a one to one ratio with the units that were in that model to begin with.

Same as when I export, it's going to export at a one to one ratio, so if an object is say, 20 units wide in ZBrush, it'll export and other programs will read it in at also 20 units wide. Now this scale setting is a little bit weird because sometimes you can open other projects and change the scale, but that scale won't get saved the next time you load it in. So I like to go through it this way to make sure that it's going to set to one. Now something else I like to do, is have a dummy object as sort of an initial SubTool in any scene.

So, let's go into SubTool, and you can see here we've just got one cylinder and actually what I want to do is replace it with a cube. So let's go down to Initialize and click on Q Cube, and let's zoom in here a little bit on it, so we can see it better. I'm gonna hit Shift F to turn on wire frame and you can see that it's made up of two subdivisions in each direction. Actually what I want to do is just bring this down to one subdivision in each direction and click Q Cube again. So now we've got the most simple cube that could possibly exist.

Gonna hit Shift F to turn off wire frame. Now I like to have this default cube in my scene, but I actually want to work on a second object. Every time I start ZBrush, if I want to start with a fresh scene, I actually want to start working on a different object, so I want to duplicate this. And I actually like to start working on a sphere. Now the reason why I'm not just turning that first cube into a sphere is very interesting. Whenever you save a tool in ZBrush, it actually changes the name of the first SubTool into the name of the file.

So, let's see, for example, if I go to Tool, Save As, and let's just save this on the Desktop. And I'll call it Test, and save it. It renamed that first SubTool to Test. Now, let's say if I was working on a character with multiple SubTools, and one of those SubTools was his hat, and the hat was the first SubTool on the list, and let's say I had renamed this to Hat, then if I go to save it, it's going to change the name and that's not what I want to have it to do.

So, what I always have is a dummy SubTool that takes the name of the file. And so what I actually want to start working on is the second SubTool. Now, I usually like to start sculpting on a sphere, so what I'm going to do is subdivide this by hitting Control D, and actually let me hide that top SubTool. So I'm gonna hit Control D a few times. So it's nice and smooth. And it's almost a sphere, you can see if I rotate around, it's slightly lumpy, not quite a perfect sphere.

So what I'm going to do is go to Deformation, and let's go to Spherize and just drag this up to 100, actually we'll do it a couple times just to make sure it's completely spherized. All right, now let's rotate around it, you can't even tell it's rotating because it's so smooth. Okay, so let's go and make this dummy SubTool. We'll just rename it to Dummy so you don't get confused if we actually have a hat in our scene. And then we've got our sphere. Finally, one thing that I want to have set up every time I open ZBrush is the gradient in the background, I want it to just be a flat gray.

And there's a couple reasons for this. I like to make a lot of movies and turntables in ZBrush and having a gradient can kind of mess with video compression sometimes and it can get pixelated or cause other problems, or make a bigger file than it has to be. So I just like to go to Document and drag this range all the way to zero, that'll just make a flat gray background. Okay, now that we have the SubTool set up and the background gradient removed and the scale of the scene set to one, let's save this project so that every time we open ZBrush, we can just double click on the one file and it goes through and sets everything up like we just did.

So go to File, Save As. And what I want to do is go to where ZBrush is saved on this computer, so under the C drive on my computer anyway. Now, on my computer it's Program Files X 86, it might be in just the normal program files for you. If you're on a Mac, it's going to be completely different, man, I'm sorry, you're just gonna have to find it, where it is on a Mac on your own. Go to Pixelogic, your ZBrush and your version number, and go to Zprojects, and this is where we can save a project that we want to have available right from the start in Zbrush.

What I'm going to do is name it "1default" and the reason why I put a one in front of it is just because I want it to show up first in the list of alphabetical order, actually let me just call this default custom, to differentiate it from the other default files and save. Okay, when you save a file, sometimes the canvas disappears, it looks the model disappeared, but if you just start touching anything in the document, it'll come back. So now when you restart Zbrush, what you're going to see is the spotlight, it's gonna be there by default.

You can hit the comma key on your keyboard to open that up. And if you go into Project, and double click on "1defaultcustom" or whatever you named it. Nope, we don't need to save changes, we'll just go ahead and load that up. There, instantly, you've got the project set up exactly the way we saved it. As you work more and more with ZBrush, you'll probably find your own special modifications that you can add to this default project. Just save over it with your customizations and they'll be there for you next time you start up.

Video: Setting up a default project