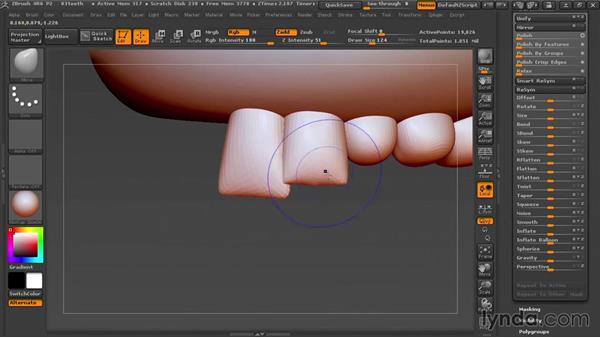 - With the teeth, we're going to get back into some straightforward sculpting. There's a few new settings that I'm going to look at that can make things a little easier. It's really just some of my preferences, but they can come in handy when you go to shape a bunch of little tiny pieces like teeth. So, let's get into it. As it is right now, the teeth are kind of small. So, let's inflate them a little bit. I'm going to do them all at once underneath the Deformation subpalate. And we'll just go to Inflate. And just crank this up a little bit. Next, I want to sculpt on each tooth individually.

And I want to sculpt on one tooth without accidentally messing up the tooth next to it. There's a setting I can use to do this. And since each tooth is its own polygroup, this is going to be very easy. So, let's go up to the Brush menu. And let's scroll down and open up the Auto Masking submenu. And, under Mask by Polygroups, let's crank this up to 100. This makes it so that any modifications in sculpting only happen to the first polygroup you touch. So if you start sculpting on this front tooth, all of the other teeth won't be affected.

Okay let's get the move brush, BMV. And there's one other setting I want to look at. Under Brush menu again, let's scroll up and open the Curve menu and turn on AccuCurve. So, let's see what this does. I'm going to zoom in on this front tooth. Let's get a bigger draw size here. And let's just pull on the front incisor. So with AccuCurve turned on, it makes the move brush operate with kind of a point to it.

So, this is useful for pulling out sharp corners. Of course, we don't want them quite so sharp. But let's just do a few little modifications here. Okay, great. Let's get the flatten brush. BFA. Now, with this brush, I want to zoom in a little bit here and just kind of flatten the back side of this tooth a little bit. You might want to look up reference images of actual teeth to see how they should be shaped. I'm not going to be super precise here, at least at first.

I just want to get the basic shape correct. Okay, looking pretty good. Let's subdivide so we get a little bit more detail in these teeth. Control d. Okay, let's do this one more time with the next tooth in line. BMV for the move brush. And let's just pull this shape out a little bit. This tooth shouldn't be quite as long as the front incisor. Here we'll smooth that shape out just a little bit. And now let's do the same thing on the back side here.

BFA for flatten. And we'll just flatten that back. And notice how the sculpting isn't affecting the tooth next to it. And that's because we have that Mask by Polygroups turned on. Now the Mask by Polygroups, it's easy to forget that you have it on. And then sometimes it can cause problems when you don't realize why you can't sculpt on certain parts of your model. So, remember to turn that off when you're done with it. So, notice I can sculpt on one tooth. But as I'm sculpting if I move on to the other tooth nothing happens. So I'm just going to hit control z to undo that.

And then also a point kind of on the back side. And there's a little gap between them. I'm going to dig a little crevice between these with the DAM standard. So, BDS. And we'll just sculpt a little crease in there. All right, the next tooth back is also a bicuspid. So, we'll go back to the move brush. Do kind of the same thing again here. Maybe I'll hold down alt and just push in with the move brush here.

Just another way to do it. And smooth it out a little bit. And now let's get the molars. So, the molars have kind of four points on them. And usually you're not going to see this detail very clearly anyway. Unless you're planning some sort of close up shot on the back of the teeth. So, I usually don't worry about being terribly precise here.

Okay, go ahead and do the last molar in the back. Just holding down alt here so I can push in and out relative to the surface. Okay, so there you have the upper teeth. If you think you'll need close ups of the teeth for what you're making, you might want to spend some more time on them. But this should be good enough for basic purposes.

12/11/2014
Join digital sculptor Ryan Kittleson as he shares his approach to sculpting realistic faces in ZBrush. By combining traditional anatomy with observation and digital techniques, this course provides a foundation for sculpting engaging human portraits. Ryan will show you how to interpret a photo reference, build the basic facial structures, achieve the likeness of the subject, sculpt facial expressions, and much more.
Topics include: