Saving masks for later use 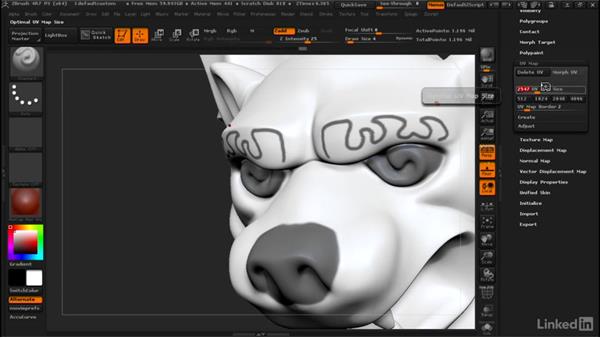 - Have you ever spent a long time painting a mask, only to find that you wish you could've come back and use it again. Usually, when you clear a mask, it's gone and you can't get it back. However, if you know that you might need it again, there are some things you can do to get a mask back even after it's removed. Let's see how it works. For this particular trick to work, you need to have UVs laid out on the model. Let's see if this model has UVs, let's go down to UV map and you can see that the Delete UV in the Morph UV buttons are grayed out, so this does not have UVs currently.

So the layout UV is we wanna go to the lowest sub-division model, let's go to geometry and drag this down to the lowest level and now we can go to Z plugin, UV Master and just click Unwrap to do a quick and dirty UV unwrap. All right, let's see what this did, we'll go back to UV map and now you can see it that these are not grayed out. Let's click Morph UV, okay, so you can see that there is UV layout now.

This model could be textured. Go ahead and click Morph UV again to bring that back to normal. Now, I'm gonna go up my sub-division levels, I'm just gonna hit d a few times and let's start painting a mask. I'm just gonna zoom in here, let's say that we want to mask out the eyes and the nose, maybe some different parts. So I'm just hold down Control and mask this section out. Now, let's say that we wanted to apply some effects at everything else but not to the eyes, so we wanna have that masked.

And let's say maybe we wanna mask out the nose, I'm not gonna take too much time to be super precise with this, if you wanna erase the mask, you can hold down Control and Alt at the same time, clean that up a little bit. And then just for demonstration sake, what I'm gonna do is draw a really fine mask just to demonstrate what this is going to look like. So let's say if I wanna mask some sort of pattern into the eyebrows, we could do that.

So let's say this mask took us a long time to create and we might wanna clear it but then come back to it. We don't wanna have to spend the time, re-masking all these stuff again especially if it's a very precise pattern that we've masked out. In order to save the mask, we're going to create an Alpha Map. An Alpha Map is kinda like a texture map but it's not for color, it's for storing data because an Alpha Map is a bitmap just like a texture, we need to set a resolution for it. So let's go in to our UV map and let's set a resolution.

Now this map could be by default 1,024 pixels on each side but you could set it to lower or higher resolution or you could drag this slider so it's where we want. So how do you know what resolution you should set this to? Well, one good rule of thumb is to look at the polycount for the object, so it's got active points of little over one million, usually if the active points is about one million, I like to set the UV map size to about 1,000. If the active points were about 500,000, then I will set this to about 500.

If there were two million, I would set this to two k map, four million at four k map, if there was eight million, I will set this up all the way up to about, an eight k map, so on and so forth. However, you can always just create an alpha and see how it looks and if it doesn't have enough resolution, you could always just increase the size and then generate it again. Okay, so I'm just gonna leave this on the one k map. Now that we've set the resolution, we need to actually create the alpha from the masking. So let's go to the Masking sub-palette and click Create Alpha, so what this did is it created a new bitmap, here in the Alpha Channel that stores that mask as a black and white image.

So now what we could do is just clear this mask, I wanna hit Control+A to mask everything and then I'm just Control+Click in an open area to invert the mask which will unmask everything. So now you could go, do other things, you could paint other masks, you could then create an alpha for that. It's kinda hard to see, if we mouse over, we could get a bigger of it. But now, we've got various alpha stored, we've got the first one that we've made, we've got the second one that we've made, so we could come back to the first one and then turn that back into a mask.

So now that we've loaded this mask into the Alpha Channel, let's go back to the Masking sub-palette, open up Mask by Alpha and click Mask by Alpha, now you could see this mask now looks slightly more pixelated than it was before, we might have wanna to actually pick a resolution that was higher than a one k map. So what you might actually wanna do is just estimate the size that it should be and then go one size larger. Let's actually do that. I'm gonna hit Control+Z to undo a few times, so we can get back to this original mask.

Let's go to UV map and let's set this to a two k map instead and then we'll go back to masking, create Alpha, now let's clear this mask, I'm gonna hit Control+A and then Control+Click on an open area and we'll go back to our Alpha and you can see now, in the width and the height, it's telling us it's a two k map. So let's go ahead and mask by alpha again to bring this back, okay, you can see that it's a little bit sharper, it's not quite as pixelated. So now, we're actually capturing the full resolution of that mask.

Okay, great, so now you know how to turn a mask into an alpha so you can save it for later use. This comes in very handy so you don't have to repaint a complicated mask every time you wanna use it.

Video: Saving masks for later use