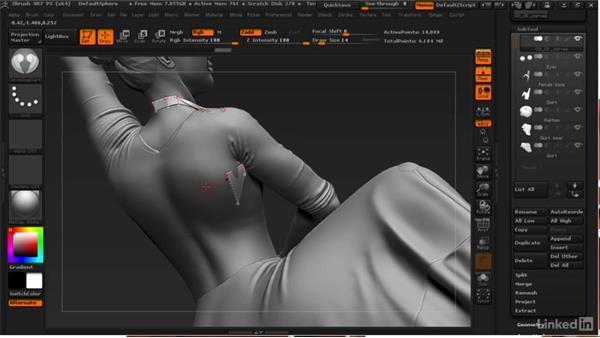 - So far in this course, we've made clothing with extractions and primitives. Now let's use a third method. The scarf that our dancer is wearing around her body is form fitting, but the way it overlaps itself is not very easy to do with extractions. You can see here on the back side of the scarf, it overlaps itself. Let's use a curve brush that will allow us to fit a self-overlapping shape onto her figure. Let's see how it works. We're going to use a special kind of brush called a curve brush, specifically the curve snap surface brush, and what this brush is going to do is create a sheet of geometry that wraps around her body in a specific way that we're going to define.

What we want to do is put this into a dummy subtool. Now in my tool here, we've already got one, this object right here, it just doesn't have any subdivision levels. If I turn on transparency, you can actually see it here. It's just a dummy object just sitting right here, hidden away where you can't see it. We're going to put the scarf into this subtool, at least at first. Now, just because you can't create curve geometry inside a subtool with subdivisions, doesn't mean that the curves won't snap to that object.

Let's go ahead and start creating this. I'm going to turn off transparency mode and let's start this at the back of her neck. I'm going to zoom in here. Now, if you don't have a dummy object in your scene, you can just append a primitive by going to Subtool, click Append and just add a sphere or a cube or whatever, and then just shrink it or move it out of the way. Okay, so let's go ahead and start. I'm going to start from the back of the neck and then start wrapping it around and then around to front and then back up to the other side of the neck.

You just want to click and drag a curve out and now we need to make another curve to connect those two. Now, there's one kind of issue with the curve brushes and that is that the curves can either start a new curve or they can build off of an existing curve. You see this red line that's connecting to the previous curve? That will actually make an addition to this curve and so if we do that, then we can get unpredictable things. It doesn't quite look right or maybe it'll continue the curve down this way.

That's not what we want so I'm going to ctlr+z to undo that as well. This red line can kind of get in the way because if I want to make a curve here close to this one, it's not really going to work very well. Let's go up to Stroke and we want to open up Curve Modifiers. Let's change the curve snap distance to something smaller, something maybe around 20 is good. Now we can make another curve in this area and we have to get closer to the existing curve before it'll make that continuation line. All right, let's go ahead and make a curve there.

I'm just going to rotate my view around and just keep making curves. Let's start making one over here. You notice we're starting to get a twist in this and that's fine actually because if we look at our reference, you can see there actually is a twist to this. All right, just making more curves down and around the armpit and it doesn't have to be perfect. We can always adjust the positioning of this later. Once it gets under the armpit, I want to take a look at the reference here and you can see it's going to start expanding and start dropping down to the waist.

I need to start making these curves longer. Now, one thing I accidentally did, I just tapped a single tap on the body and that removes all the curves. I'm going to hit ctrl+z to undo that. Now we can keep adding to this. Okay, I'm just going to keep going around. Just adding a new strip every few inches. Now, one thing you're going to see is this curve brush is going to try to continue from existing curves, even if they're on the other side of the model.

We have to be careful about this and maybe rotate our view so that we're not accidentally connecting a curve with a curve on the other side of the model. Now, this hand is going to start getting in the way so I'm going to go over to the subtool that has the body base and just hide this temporarily.

Now, actually I didn't want to do that just yet because I need to actually draw this curve on the body right here, so let me start the curve here and come down and now that hand's in the way. What I can do is hide the body now and now I can continue this curve. I want to get close to the bottom edge of that where I can see that red line that connects it and this will allow me to continue that curve down. Okay, great. Now we'll just keep wrapping this around.

You see I've left kind of a point there? That's because in our reference, this comes down to a point. It doesn't have to be exactly in the right place right now. I can always adjust it later. Okay, let's keep making this curve all the way around. Start bring it back underneath the arm on this side. Got to be careful not to connect these new curves with an old curve and it looks like I need to bring this one down a bit further.

Okay, let's keep this wrapping around. I'm going to check my reference really quick to see what shape this takes. I'm just being careful not to make any new curves that snap to previous curves that are on the other side of the model.

Can be a little bit tricky sometimes. Okay, we need to start narrowing this up now as it wraps around here. All right, let's bring back the body model here so we can start snapping it to the neck.

Let's do one more. Oops, it looks like I accidentally connected that one to a previous curve. Let's bring it right over here. Okay, so there's a start on the scarf. There's a lot left to do, but at least we have a foundation. Now, what we need to do is clear the curves and just leave the new geometry. I'm going to do a single click anywhere on the model. Finally, I want to split the scarf from the dummy object that we started with, so let's go into Solo mode and you can see we've got that dummy object just sitting down there. Let's got to Subtool, Split and Split to parts and this is just telling us that we can't undo this.

This is fun. You see we've got two subtools now. We've got the scarf and we've got that dummy object. I just like to move the scarf down so that the dummy object is always on top. Let's just rename this Scarf. Okay, so there's a start of a scarf using the Curve Tools. Now you may have noticed that Curve Tools can be a little bit finicky but the more you practice with them, the better you're going to get.

2/10/2016
Fabric and cloth have been challenges for sculptors to simulate for thousands of years, and it's no different with today's digital tools. Join Ryan Kittleson in this exploration of the strategies he uses to sculpt and model realistic clothing in ZBrush. Ryan uses the latest tools and techniques inside ZBrush to make cloth that folds, bends, and conforms to a human figure in a lifelike way. There are three pieces of clothing made in this course—a shirt, a skirt, and a scarf—built using the dancer model's underlying anatomy. Ryan reveals practical techniques for draping, clinging, stretching, flowing, and bunching cloth, using primitives, curves, and ZBrush's sculpting tools. Along the way, he offers tips on adding realistic details such as lace, woven patterns, seams, and tassels to clothing.
Topics include: