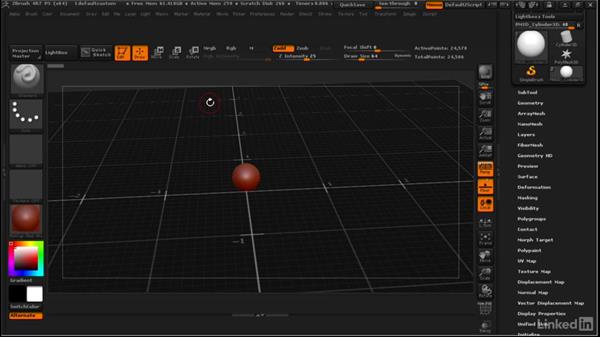 - ZBrush does so many amazing and different things, but not all of those things are useful for everybody. For example, I never use some of the default interface buttons like Projection Master and Quick Sketch. They might be useful for some people, but I never use them. And then there's a lot of features that I use all the time that aren't on the main screen. And I mean a lot of them. In this video, I'll show you how to streamline your interface, so that you can get rid of the unused items and put the features you actually want to use front and center. Okay, first, let me show you what my custom interface looks like.

Now, it's a drastic departure from the factory default. What you see here is, I emptied out all the user interface slots on the top and on the sides, and put everything on the bottom. I also like to minimize the tool palette on the right side by clicking on this bar here. So that clears up even more space. One thing that you can't see here is that in my own personal workspace, I have two monitors. One placed on top of the other. So I put my ZBrush in the top monitor and I actually drag the ZBrush window down so that all these buttons are on the lower monitor.

That way I have a full screen of just my document window on one monitor and all of my buttons on the monitor below it. Also, when I work on my laptop away from my office, I just have one screen. So what I do then, is I just hit the Tab key, which hides the interface so I can see more of the sculpture if I need to. Then when I want my buttons back, I just hit Tab again to bring it back. So let's look at what I have in my custom interface. Keep in mind that I have this set up in a way that makes sense to me. It's just my personal preference. I realize that it looks like a jumbled mess.

But what I have here is controls grouped by function. So you can see I've got my Dynamesh controls here. I've got controls for ZRemesher here. For decimation, for shelling and extracting thickness, my subdivision levels here. 3D printer export. I've got size and scale and rotating here. Display options, poly groups, mirroring and symmetry. Brush controls, color and texture maps, projection.

I've got mask controls, movie controls, and a lot of the brushes that I use on a regular basis. A lot of these buttons are also based on custom macros that I've made and plug-ins that I have installed. So, in order to customize, you need to turn on a special mode. So let's go to Preferences, Config, and Enable Customize. So you might have seen the interface shift slightly. We're in Customize Mode now. So, for example, if you want to get rid of any of these interface buttons, you hold down Control and Alt at the same time and then click and drag.

So let's say, under Texture, maybe I use Load Spotlight all the time. So I might drag this in and maybe I want to keep everything that has to do with texture and color together. So I might drag things from one part of the user interface to another. And you could just spend all day doing this. So let's say you like it the way it is and you want to save it for future use, you just go to Preferences and click Store Config. That way, every time ZBrush starts, it'll start with this custom interface.

And here there's already some default ones that come with ZBrush and we can save this as My Custom and then click Save. And then this just it's been saved successfully, and then if you want to toggle through all of those saved ones that are in that folder we just saved it to, you just click on either of these two buttons and it'll just flip through all the different interfaces that either come with ZBrush or that you could save custom in that folder. Let's go ahead and set the interface back the way it was originally.

So we'll go to Restore Standard UI. And, when we're all done customizing things, we can go back to Config and turn off Enable Customize. Throughout the videos and this tips and tricks course, I'm going to use the factory default user interface so that it doesn't get confusing for you guys. But I highly recommend that you modify your own user interface to reflect the way you like to work. It really makes it faster for me to have my common functions right here on the user interface, rather than having to dig through different menus every time I want to find something.