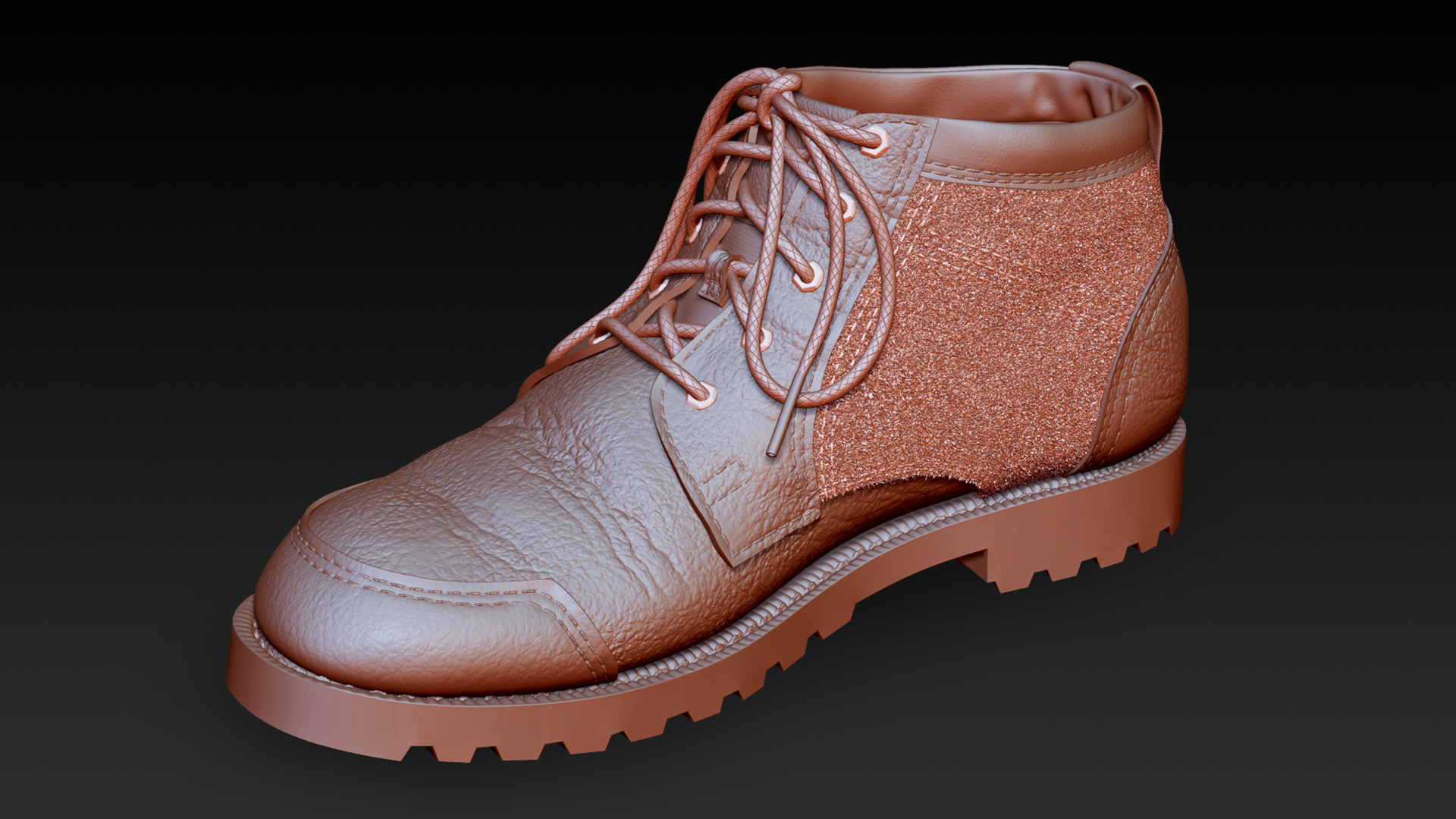 - [Narrator] As it is right now the sole is relatively low poly. You could easily see the faceted edges. Ultimately we'll want those surfaces to be smooth and the corners to be hard. With creasing and dynamic subdivision we can set it up so that everything looks right, even with a fairly simple mesh. So let's see how it's done. I'm gonna hit Shift + F to turn on the wire frame. So you can see it's a pretty low poly mesh. Now what we can do to smooth things out is hit D to turn on dynamic subdivision.

So it's not actually subdividing our mesh by adding new subdivision levels. You can see here we don't really have any subdivision levels, but in dynamic subdiv you see that it's turned on. So we could hit Shift + D to turn that off or just click on dynamic here, turn that on and off. So what it's doing is it's just keeping the same low resolution mesh but smoothing it out as if we had added subdivision levels. So what I want to do to keep the hard edges from smoothing out is add some edge creasing. So let's go into crease.

So what we wanna do is add creases and there's a crease tolerance so this set by the angle. So let's just see what happens when we hit crease. This actually looks pretty close. So I wonder if this is exactly the result we need or if we need to make any adjustments. So basically what it did is, any angle of edge that's less than 30 degrees remains uncreased and any edge that's more than 30 degrees gets creased. So now let's see what happens when we turn on dynamic. I'm just gonna hit D.

And let's hit Shift + F to turn off wire frame. Okay, that actually looks pretty good so this surface is now all smoothed out but the corners are nice and sharp. Now there's actually one little space where it didn't quite do it right. There's some edges right here that need to be sharp. So I'm gonna hit Shift + D to turn off the dynamic subdivision. Shift + F to turn on wire frame. So you can see that we're missing an edge crease right here because the little extra dotted line around edges is what tells us that an edge is creased.

So let's go ahead and add a crease to that manually. So what I'm going to do is get my ZModeler brush, B + Z + M. We'll just skip this note. Okay now what I want to do is hover over an edge and hold down Space Bar and let's go to crease and crease edge, that's good, and we'll just click on these edges that we want to be creased. Alright, let's see what happens now if we turn off wire frame and hit D. Okay, great. We're getting a really nice effect here. Now there's something else interesting going on that we should talk about.

Let me zoom in a little bit here. You can see that this edge is getting creased but it's not creased completely hard. There is a little bit of a round bevel to it and that's because of the way I've got crease levels set up. So let's see what happens if I bring the crease level down. Now we're not actually going to see anything until I turn off dynamic and then turn it back on. So Shift + D and then D again. So what you can see is happening here, is that there's less of, it's still a little bit harder, but it's a lot softer. It's still harder than if there were no creasing at all but it's a little bit on the soft side.

So what this basically is doing is it's adding some hardness before it smooths it out. So let's hit Shift + D to undo that. And let's bring this a little higher, let's say six. Now I'm gonna hit D to turn on dynamic again. And you can see now it's smoothing out this surface that's uncreased, but the creased surfaces are completely hard. So I'm gonna hit Shift + D again to turn it off. And actually I really liked it where it was on four.

Where it was just the subtle little bevel on that edge. So let's go back to dynamic, turn that on, and you can see now we just have a little hint of a rounding on that edge, but it's pretty hard still. Okay so go ahead and experiment with creasing different edges different amounts of crease hardness and see what kind of results you can get. Before ZBrush had edge creasing and dynamic subdivision, we would have had to create a lot more mesh density to get the same effect, and it would have been a lot harder to edit and control.

But using these simple techniques we can get a great result with much less effort.