Automating thickness extrusion with a macro 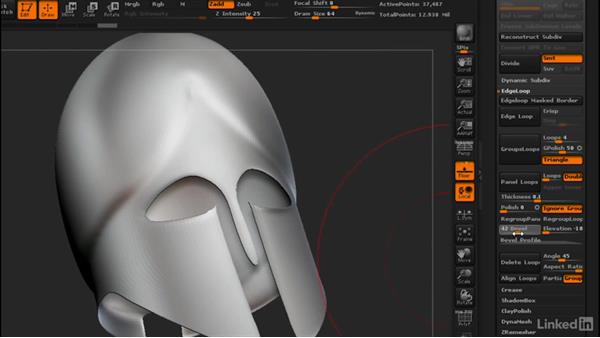 - Transforming a flat object into one that has thickness, is one of the most common tasks that I perform in ZBrush. And there are several ways that you can go about doing it. So, let's take a look. Now, on this sculpture, I wanna give the helmet thickness. Let's go into the Sub Tool, make sure we've got the helmet selected, and, what I'm going to do is turn on Solo, so we only see the helmet. Let's hit f to zoom in on it. So, you can see that it doesn't have any thickness right now. One tool you might consider using for thickness is the Z Modeler Brush.

If you set it to QMesh you could extrude out the object, but one disadvantage to that is that you can't control exactly how thick it is. Now, I like to do a lot of 3D printing, and for that, I need to know precise measurements of how thick something is. So, for that, we're going to use a feature called Panel Loops. So, the Panel Loops can be found in the Geometry sub-palette. And, if you open up Edge Loop, all of these different controls right here relate to Panel Loops. Now, there's a lot of things that we need to set up in order for extrusion of thickness to work right.

So, just for the sake of being able to push these buttons, I've got it right in the middle of three subdivision levels here. So, let's go to Macro, and Make New Macro, and unless you really know what you're doing, we should actually go against ZBrush's advice, and click No here. Now, let's go ahead and delete subdivision levels. Let's go, Delete Lower and Delete Higher. So, that got saved into the macro. Something else you want to do is set Polish to zero. By default it's often around five or so. We want to bring this all the way down to zero.

Okay. Let's go ahead and click Panel Loops. Now, one thing about this is, it extruded to a thickness of .1, and that's actually way too much for what we want to do, but that's okay, don't worry about that. We want to save a macro of this without controlling the thickness, so that, after the macro's recorded, we can actually set the thickness independently of the macro. Because if we go and set the thickness now, that will get saved into the macro. So, let's go ahead and save that Macro now. Hit End Macro, and let's just save this to our Zbrush Installation location.

And we'll go inside the ZStartup folder, and inside Macros and inside Misc. Alright, save that. So, now we can hit Control Z to undo that thickness. Now what we can do is set this to a different number, like .02, I don't know, let's see how that looks. And then go back to the Macro, click Thickness, and see what that does. Okay, that looks pretty good. It actually gave us maybe a little bit more thickness than I wanted, so we can hit Control Z to undo that, and maybe bring that down to something like just .008.

Macro and Run that Thickness macro again. Okay. So, now we've got something that actually looks like it should be. Now, I like to keep this macro on my interface at all times. So, let's go to Preference and Enable Customize. I'm going to go to Macro and I'm going to hold down Control Alt and click and drag this thickness onto my interface. And then I also like to get the Thickness Amount slider and put that right there.

And, so, at any time, I can just set a thickness, click that button, and instantly create thickness on any object that I have active. Let's go to Preferences and Turn Off Enable Customize, and we'll store that configuration so that we've go it every time we load up ZBrush.