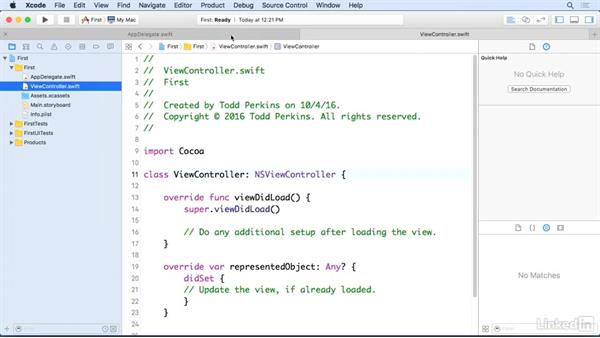 Tabs enable you to optimize your own performance when working in Xcode. In this video, see how to show the tab bar in Xcode 8, and how to add, remove, and organize Xcode 8 tabs when creating apps for Apple platforms.

- [Instructor] Let's say you have a giant project…with a ton of files and you have…a certain small group that you're working on currently…and you're bouncing back and forth between those files.…Instead of finding them, maybe they're in groups,…and drilling down, and exposing them,…and then selecting them one at a time,…you can actually put each of those files in it's own tab…so you can quickly jump between those files.…To show the tab bar in Xcode, go to View, Show Tab Bar.…

With the tab bar showing,…you can actually create a new tab…by clicking the plus button…or by going to File, New, Tab,…or of course using the keyboard shortcut, command + t.…So now I have two tabs,…and they're both AppDelegate.swift.…So I'm also going to be using ViewController.swift,…so I'm going to click on that…and that applies to my second tab here…so I can tab between these two files.…If I want to add a third one…I can press command + t on my keyboard,…add a new tab, and put Main.storyboard there for example.…

So now I have these three tabs I can navigate between.…