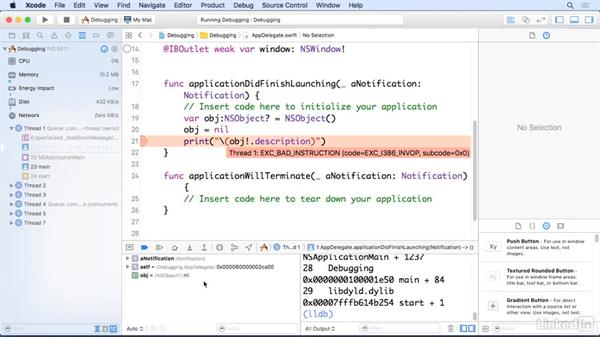 The debugger enables you to debug apps by showing you values of variables and other useful information. See how it works in this wonderful movie!

- [Teacher] Let's look at how…the debugger works in Xcode.…Of course if you're going to be debugging,…you need to make sure that your scheme…is set to Run the Debug Build Configuration…in the Run settings in your scheme.…Now this is the default configuration,…so it should be fine.…Just make sure it's running the…appropriate configuration and that…Debug Executable is checked.…So here on our screen, we have some simple code.…I'm declaring an optional, setting the optional to nil…printing out the optional's value…and force unwrapping it and grabbing a property.…

It builds just fine if you press CMD B,…but if you run the application,…the app crashes because we're…trying to get a property of a nil object.…If we're just looking in the editor,…we get some really poor information…about what the problem is.…We see this EXC_BAD_INSTRUCTION.…It doesn't tell us anything.…We have the debug navigator to navigate through this,…and we can see our thread hierarchy…so we can open up the various threads.…

And if we open up thread one,…

Video: Use the debugger