Use the compiler from the command line 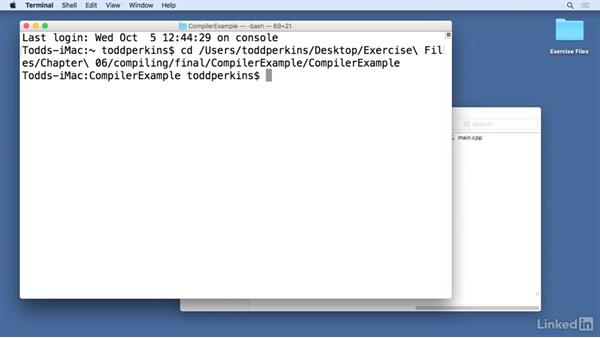 The C++ LLVM compiler can be used from the command line. This movie shows how to set it up, which is surprisingly easy!

- [Instructor] You can actually use XCode's LLVM compiler…from the command line, so I'm going to open up…a terminal window by pressing Command Space…and searching for Terminal.…I'll just press return when it's selected,…open it right up, and I'm going to make…my font size bigger in Terminal by using…the command plus shortcut, nice and gigantic…so it's easy to see, and then I need to change…to the directory where my C++ file is.…So I'm going to type CD and a space,…and then I'll just drag in the folder…that contains my C++ file that I created…in a previous movie, right into, right into Terminal,…and then press the return key.…

So I've changed the appropriate directory,…and now to compile my C++ file,…I simply call C++ and then the name of the file.…The file compiles, and then I can see…that A.out is actually added into that same directory,…so now let's say I want to run that from Terminal.…Dot, forward slash, name of the file, A.out,…and that's it, run the command,…and I see the output from the file.…

So if you ever need to use the LLVM compiler…

Video: Use the compiler from the command line