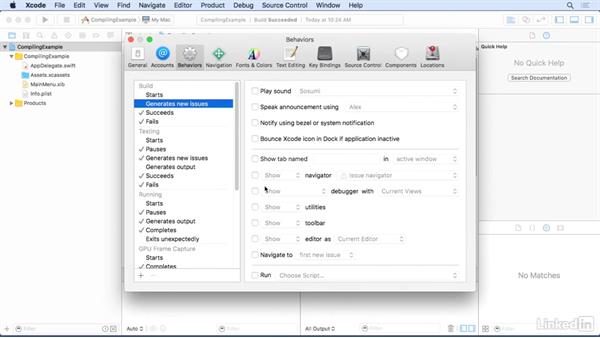 Behaviors give you further control for options when you run, debug, or test an app. These features include adding a sound for when the app builds successfully, speaking a command, running a script, and showing or hiding a portion of the user interface of

- [Narrator] Now we've looked at how through steams,…you can run certain commands or scripts…to send an email when your application builds or runs.…You can actually do something similar with behaviors.…Let's look at how behaviors work.…I'm going to go to Xcode, preferences.…In Xcode, preferences, I'm going to head over…to the Behaviors tab.…Now, in the Behaviors tab, you'll have some actions…on the left side of the screen…and settings for those actions…on the right side of the screen.…

So, if you'll look at existing options that are already set,…those are the ones with the check marks,…so when a build generates new issues,…you can see what happens by selecting that.…That says to show the issue navigator in the navigator.…If you want to disable that, simply uncheck the box.…Then it will no longer show the issue navigator…if it generates new issues.…When the build succeeds, it notifies using a bezel…or a system notification.…

When a build fails, it does the same thing.…If you don't like it, uncheck the box.…If you want to respond when a build starts,…