Use the Size Inspector 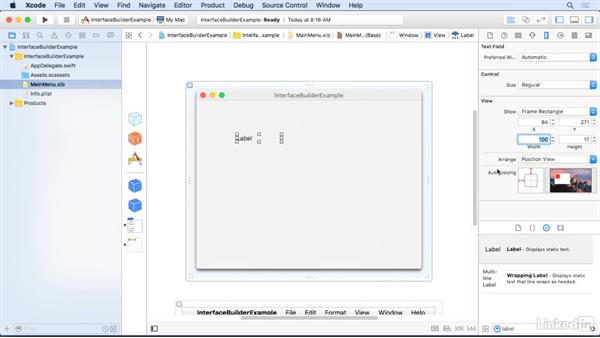 The size inspector allows you to change the size and position of objects. Sometimes this is useful when an object is off-screen, or if you need to be precise in your positioning. This video shows how to use the size inspector.

- [Narrator] The Size Inspector allows you to…adjust the positioning and size of objects.…We're going to select my window here,…and then filter for a label in the object library.…Drag one out to my window, and with the label selected,…I'll head over to the Size Inspector.…Remember that the Size Inspector is the…ruler icon in the Inspector bar.…Just like the Attributes Inspector, we see…specific to general, top to bottom,…Text Field at the top, View at the bottom.…

If we want to adjust the size or positioning…of the View, which is the bounding box for…our text field, we can adjust the X and Y,…and width and height values.…Of course, you can also replace the numbers…with a specific value, and then press…the Return key to commit the change.…You might want to use these features…if your app needs a precise layout,…down to the pixel or the point.…Autoresizing deals with the positioning and size…of your object, how it resizes and moves…based on the size of the window, so you can…control that there if you like.…

For now, we're not going to change that.…

Video: Use the Size Inspector