Use the Quick Help inspector 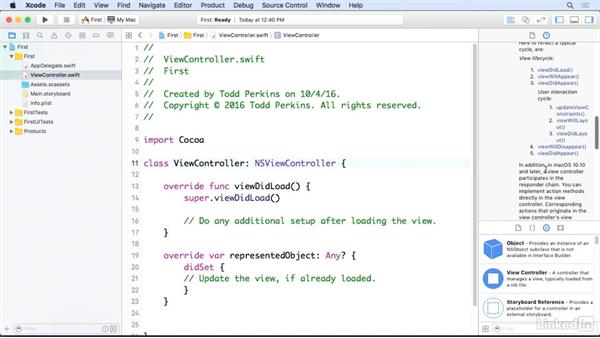 - [Narrator] The Quick Help menu…is the menu on the right side of the screen.…Remember, you can show it by making sure…the Utilities area is showing,…and then going to the Quick Help Inspector.…That's in the Inspector bar at the top of the utility area.…It's the one with the circle with the question mark inside.…And yes, we have talked about this briefly before,…but I want to show how useful and how quick it can be.…So let's say we put our cursor inside…where it says NSViewController in ViewController.swift.…And we're interested in learning about…how a ViewController object works.…

We can read the description,…learn information about how it works,…and then we can see, in this section,…the view life cycle.…This list, an order in which methods are called…inside of a ViewController subclass, so you can…find information about that here.…If you want to know anything about these…particular methods, you can simply click the links,…and you're taken immediately to that description…in the documentation.…So, this is an extremely fast way of getting…

Video: Use the Quick Help inspector