Use the Connections Inspector 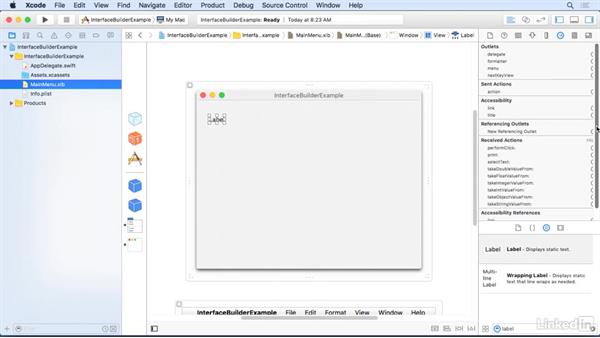 - [Instructor] The Connections Inspector…is for connecting user interface elements…to code objects and to each other.…Let's drag out a label on to the screen…by filtering in the object library.…Let's drag one out right here,…and then instead of using the attributes inspector,…let's write the code manually to make the connection.…I'll go to AppDelegate.swift, and then I'm basically…going to copy the above line with the @IBOutlet call out,…so @IBOutlet weak var label,…it's going to be of the type NSTEXTField,…and it's going to be an implicitly unwrapped optional,…so I'll add that exclamation point there.…

So I've created this property.…If I save the file, I should then see that hollow circle,…so I've created an IB outlet call out,…but it's not connected.…Let's go back to our ZIB file, and then what I want to do…is head over to the Connections Inspector.…So I'm going to have the label selected.…I'm going to go to the Connections Inspector,…and this basically says, what actions, what objects,…this is connected to, and these hollow circles right here…

Video: Use the Connections Inspector