Use the Analyze tool 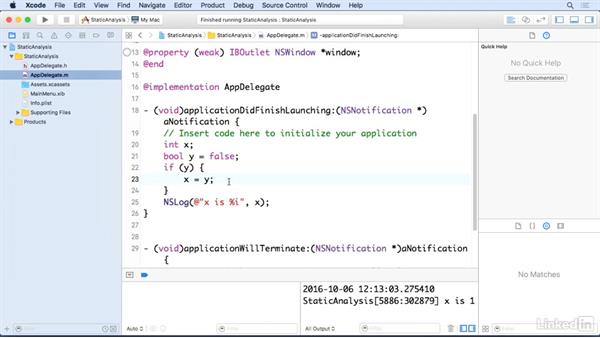 The analyze tool is only available in Objective-C at the moment, but is highly effective when it comes to pointing out how a problem in your code occurred. See how to use the tool in this movie.

- [Instructor] Sometimes your app will build fine…and run fine, but there's still a problem with your data.…The feature that I'm currently showing…only works in Objective-C for the time being.…So here I have an Objective-C project…and you can create one just like we've created them before,…just choose Objective-C instead of Swift.…So what I'm doing here is creating an integer…and not giving it a value, running some code,…and then printing out the value of the integer.…

If I build the app, it works fine.…If I run the app, you'll notice in the output window…when I'm logging it, I'm seeing that x is one.…Well, I actually never set x to one.…X is not set, y is set to false,…if y is set to true, which it's not,…x should equal y, so x actually doesn't have a value.…Why is it being set to one?…The way to test that is through the analyze tool.…You can do that using product, analyze.…

When you call that, you then see…a more detailed error message.…It says, function call argument is an uninitialized value.…You can actually click on this little icon…

Video: Use the Analyze tool