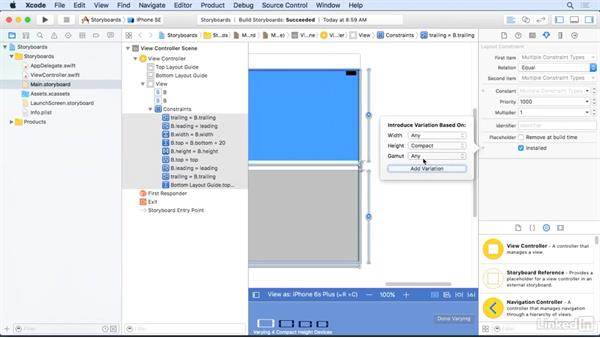 Size classes are groups of sizes. Apple sees iOS device sizes as compact or regular. A device may have a compact width or height, or a regular width or height. These attributes change depending on orientation. See how to use these classes to develop bette

- [Teacher] Apple groups devices into having…either a regular width or a compact width…and a regular height or a compact height.…So these are called size classes.…You can see which devices and which orientations…fall into which size classes directly in Xcode.…At the bottom of the screen in Interface Filter,…I want to point you to where it says View As, then will…say the name of the device and then some parentheses.…In the parentheses, you'll see w,…and then a letter, an h, then a letter.…

The reason why this matters is that Xcode actually…allows you to vary your user interfaces based on a…device's width or height being compact or regular.…