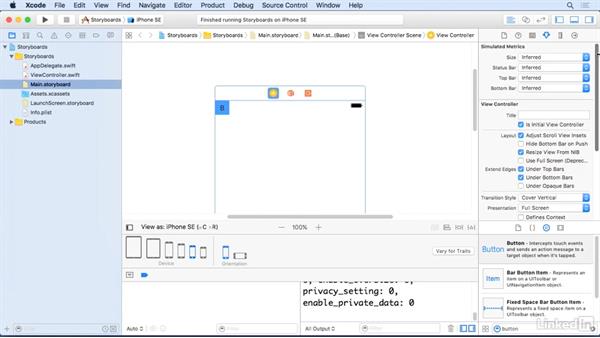 - [Instructor] When you're developing,…particularly for iOS you're dealing with…many different devices, screen sizes,…aspect ratios, orientations, etc.…One way to handle this effectively…is by use of something called pins.…Pins allow you to stick a user interface object…to the edge of the screen or to…another user interface object.…Let's look at how pins work.…I'm going to filter in the object library…for a button and then click and drag it onto the screen.…

I'm going to change the text of the button to just be b.…So I'll double click button, change it to a b,…press return on my keyboard.…Now I'll give the button a color and a background…through the attributes in inspector.…So the text color will be a dark gray color…and the background which I'll change…in the view settings will be a blue color.…So we have our button one here and then I'm…going to option drag it to create a copy…and I'm going to change the background color…of the copy to some other color.…

It doesn't matter what color it is…as long as it's different.…